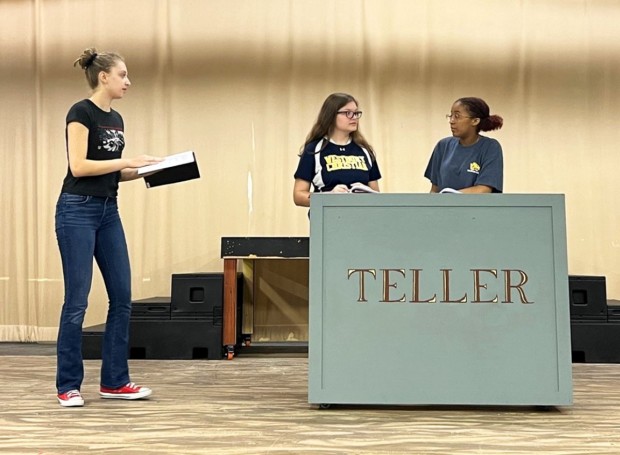 As the first semester of the 2022-2023 school year drew to an end, Westbury Christian School's theater program introduced its production of Radium Girls, a historical drama set in the 1920s.

This introspective and powerful story follows Grace Fryer, Irene Rudolph, and Kathryn Schaub surrounding their time working at a glow-in-the-dark watch dial factory. Used to help soldiers see their watches in the dark, the girls meticulously painted with the bright and "cancer-curing" radium paint. The girls at the factory are instructed to lick the tips of their paint brushes to make a point for exact details. This action would inevitably cause deterioration, disease, and death. The play displays a persevering fight for justice and the ultimate consequences of negligence.

A Q&A was conducted with the show directors Ronnie Blaine and Malaika Lund to celebrate the opening night.

What do you hope the audience experiences while watching?
RB: Amazing courage and bravery can rise from the most underestimated and underappreciated. Grace (the lead character) is a young girl in her teens who never spoke up for herself and always did what she was told because that's how her parents raised her. Yet, once the shameless and unjust actions of a huge corporation claim the lives of her friends, she summons a strength from within to do what's right and hold them accountable against all odds.

Is there a specific scene or musical number you are looking forward to seeing? If so, why?
RB: Grace has a monologue directed to her mother that sums up the message of the play for me. She tells her mom that the company knew that she would consider herself too small and insignificant to make a fuss about what was going on even though she knew. This speech hits home for me because too often our youth, specifically our young women are made to feel like they have no voice and they need to stand down no matter how righteous their cause may be. "That is what they were counting on"

What is one of the biggest challenges of the show?
RB: Definitely one of the biggest challenges for most of our productions would be scheduling. Trying to coordinate a cast of 20 students who all have different extracurricular obligations is never easy. It truly takes a village. Thankfully, our athletics department, as well as the VEX, engineering, and fellow fine arts departments all make a concerted effort to be as flexible with scheduling as possible to allow our students to participate. Still, nothing is as important as all of our amazing parents! Along with our incredible PTO, our cast parents are the glue that holds this entire show together. From feeding us amazing meals on those late tech nights to setting up seats for our audience to sit in, it is without a doubt the WCS Families that make it happen!

Anything else you would like to share?
RB: I cannot overstate what a privilege it is to watch these young people grow in self confidence and self assuredness. It is truly a blessing.

What do you hope the audience takes away from watching?
ML: There is no such thing as being too young or not being educated enough to make a change. These were young girls from poor backgrounds and little education that stood up for what they believed in, regardless of all of the odds stacked against them. Their sacrifices and bravery shaped so much of what we take for granted today.

Is there a specific scene or musical number you are looking forward to seeing? If so, why?
ML: There is an amazing scene with Kathryn, Grace, and Tom as Kathryn is searching for answers at the records office. In that moment, we learn just how much these girls suffered, as well as the obstacles they faced from the public and the government. In this scene, Kathryn's persistence and desperation sets the tone for how Grace later responds to their situation.

How have students been preparing? How would you describe the preparation?
ML: This has been a demanding process for our cast, especially for our younger students as the play is very serious in tone due to its historical context. Mrs. Hatfield and Mrs. Roman worked with our cast members to help them to understand the context of the show and what informed the decisions the different characters made. The students have worked hard to support one another and it has been amazing watching them research more into their individual characters and connect to the show.

What is one of the biggest challenges of the show?
ML: I would say one of the biggest challenges of the show is also one of our biggest blessings. We have so many new students participating in the production this year. This includes students new to Westbury Christian School as well as students who have never done a production before. Our veteran students have done an excellent job with supporting the newer cast and crew members and "showing them the ropes." The new actors and crew members have done amazing jobs with reaching out for assistance when needed and building relationships with the veteran cast and crew members in order to ensure success with this production.

Anything else you would like to share?
ML: I am so excited to see Westbury Christian School's interpretation of Radium Girls. This is my third time working on this show, and each time has been from a different perspective. It has been fun to see how these students and Mr. Blaine take this show and put their own stamp on it!

Some alums are returning to help with this show. Could you tell me about that?
ML: We have been blessed to have three of our alumni return to participate in the crew for Radium Girls. Jill Chauvin '22 has returned in the position of Stage Manager, and is fully utilizing her experience from Fourth Wall Theater to elevate the theater program here at WCS. Sarah Asteriou '22 has returned to act as our props master and has been thriving, taking what she has learned in the WCS theater program to guide the young crew members and create amazing props for the show. Finally, Andrew Archer '20 has returned as our lighting designer, and has brought with him his training from the University of Houston, as well as the professional work he has done with lighting and sound design.

I heard the 5th-grade class is doing the stage crew! Could you tell me a bit about that?
ML: It has been great seeing the 5th grade class step up and join the stage crew. I had the opportunity to work with many of these young students in Mary Poppins, Jr. last year, and it is amazing to see how much their love of theater has grown. They are working very hard, and it is often difficult to tell that this is the first time they have ever done stage crew for a show!

The cast and crew of Radium Girls were glad to present the results of their hard work and dedication in Radium Girls.

Editor's note: The author would like to give a special thanks to Coach Kayla Rogers for her assistance with the interview.