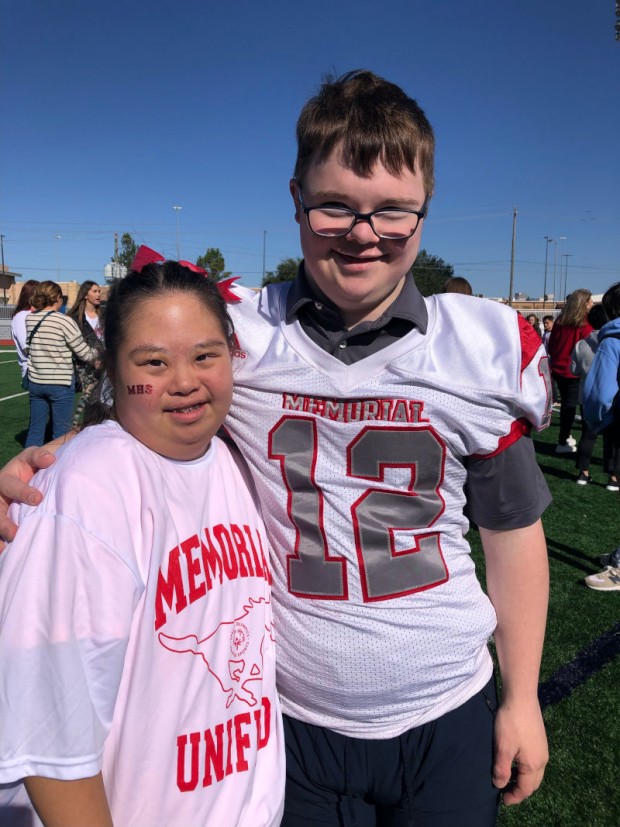 In the picture: Juliet Yi (Left) and David Morse (Right)

Holding a Unity Game at school allows the kids in special education to have the opportunity to show and perform their skills for the entire school. A sophomore Katherine Ferruzzo is a member of the Super Friends club responsible for supporting the Special Education program at Memorial High School. She said, “I think the Unified Game was a great opportunity for everyone at Memorial to come together as a true community! I felt everyone had lots of school spirit, and overall it was a special moment for everyone!”

I attended the game and was overwhelmed by the support Memorial had for their fellow mustangs. The bleachers were filled with kids cheering on the football team. Through the short 30 minutes, the whole school was brought together to enjoy football with the kids who aren’t on the football team but share the same love for the sport. A sophomore at Memorial High School, Elizabeth Morse’s brother, participated in the game.

She said, “I had such a fun time watching my brother play in the Memorial Unity Game. Watching my brother get the chance to play in front of the school and seeing his excitement on the field made me so happy. I love that Memorial has created opportunities like the game for all the kids in the life skills room.”

Elizabeth’s brother, David Morse, who is in life skills at Memorial said, “It was fun playing with the real football players and running across the field.” Memorial hopes to make the Unity game an annual event to incorporate the whole school in a friendly game of football.