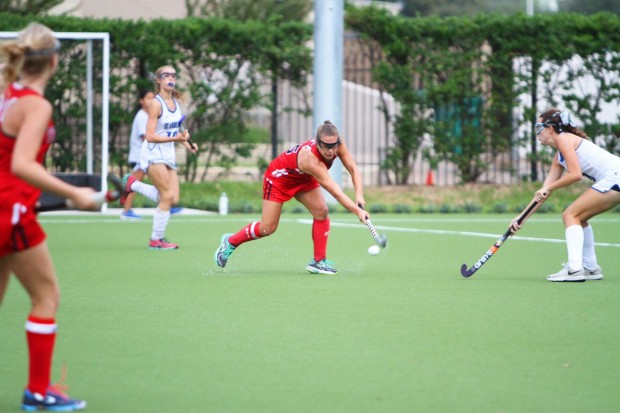 When passing Finnegan Field, home to many Maverick field hockey, soccer and lacrosse games, one may see several arcs of water spraying high into the air. This is not a sprinkler system malfunction, but a feature of the new water-based turf system which was installed on Oct. 12.

Water turf fields are primarily used for collegiate-level field hockey, and as the sport is more prominent in the north, the St. John’s facility is the only one of its kind in the southwestern United States.

Construction occurred throughout the summer and included the installation of an 8,000-gallon water tank underneath the field. 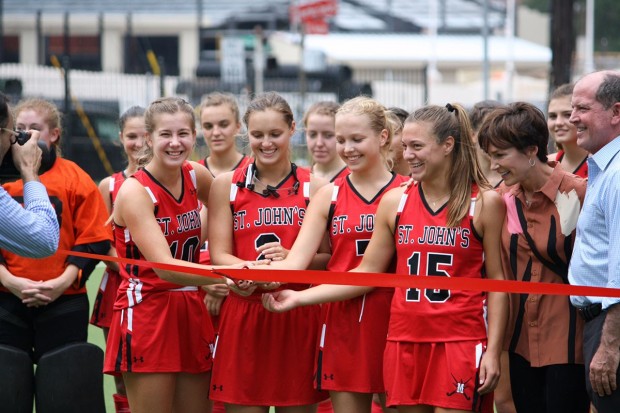 The field uses four water cannons to spray jets of water onto the new turf, creating a thin layer of water which promotes fast play.

“Field hockey is supposed to be played on turf, because it’s faster and more controlled,” Chambers said. “Many girls play field hockey on turf outside of school, so the new surface gives them the opportunity to play the game they’re used to playing.”

Unlike conventional turf, the water-based system also creates a cooling effect and helps to absorb shock, which can protect players from injury. However, some players still prefer falling on softer grass rather than water turf. 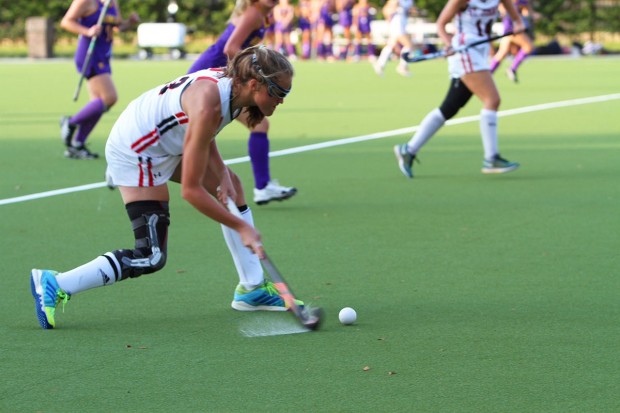 Junior Isabel Windham races down the field during a game against The Kinkaid School, as water from the turf sprays up behind her stick. (Photo: Audrey Ledbetter)

Another benefit of the turf is its resistance to inclement weather.

“We don’t have to worry about the weather anymore,” junior Schuyler Gustafson said. “If it rained, that used to destroy the grass, but now we can still play, even if it’s pouring.”

Some players recommend a longer fence in the future, arguably the field’s only need for improvement.

"The only problem is that the fence on the side of the street doesn’t go all the way down, so the ball can roll into the street,” junior Audrey Ledbetter said.

“It’s much easier to play on because I’m supposed to slide, and I used to get caught in the grass,” she said.

Field players also find the smooth turf helpful in many areas of the game.

“Faster play helps us to develop our skills,” Ledbetter said. “We can use the field to our advantage with passing because we can transfer the ball more quickly.”

However, other schools playing games at the new field may not appreciate the home advantage that water turf provides.

“It’s hard to go from grass to turf, especially if you’re playing against a team who consistently practices on turf, because it’s faster,” Ledbetter said. “In SPC, there was a lot of lobbying to get the tournament on a turf field, but many teams like Hockaday [in Dallas] wanted grass because they thought teams with turf would have an advantage.”

The conflict between teams about turf and grass fields will likely only increase in the future, as more schools make the switch to turf.