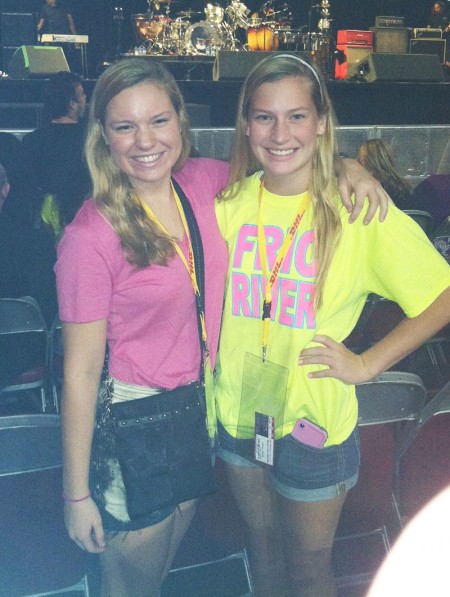 Haley Kurisky (on left), pictured with her sister Holly in 2012, the first time they saw the Red Hot Chili Peppers.

Reading this month’s Buzz Kidz article written by Mason Granoff about his first KISS concert made me think about how I got into music and my first concert. As many of you know, I write a monthly concert article for The Buzz, and am an avid concert-goer. My first concert was actually seeing Joe Ely (who I write about and include in many of my articles) at the International Festival in Houston, back when I was in a stroller. Who would have thought I’d still be seeing him, nearly 18 years later?

As evident in Mason’s excitement from seeing his favorite band, KISS, seeing your favorite live act is one of the best feelings ever. When I saw the Red Hot Chili Peppers two summers ago in Canada, I felt as if life simply couldn’t get any better - it was one of the happiest moments of my life, watching my favorite band with my family. But what makes these concerts I go to every month so special is the fact that this is now more than just a fun activity I use to pass the time occasionally. Going to concerts is a hobby I am passionate about, and has changed my life and bettered my relationships with many people around me. My parents, especially my dad, are really into live music, and because of this, I grew up going to concerts all the time. Some of my earliest memories take place at Jazz Fest in New Orleans, which I have been attending for over 13 consecutive years.

Because I was exposed to live music at such a young age, I have been able to explore my own music tastes and the music scene for my own while also being exposed to all the music “greats” of my parent’s generation. Although it may seem taboo to take a young child to a hard rock concert, I have met some of the nicest and most welcoming people at some of these shows who respected the idea of teaching a younger person in the next generation about the music of the previous generation. Tapping into my creativity and music knowledge as a young child has greatly affected my thoughts on music and the world around me.

I am so glad that I was taught at a young age to appreciate many different types of music and to engage in the arts and culture scene around me wherever I go. In going to live shows, I have visited places in Houston that I never would have been to if not for shows. I have met people (including famous people!) that I would have never known or come into contact with if not for music. In this way, I have been able to expand my worldview and break out of the bubble that many people find themselves in.

I have been lucky enough to not just go to a few concerts, but go to some truly amazing concerts. How many kids can say their second concert ever was the Rolling Stones? My engagement with music has cemented a bond with my dad, whose music tastes I most resemble, and led me to so many opportunities, including being able to write about concerts monthly for The Buzz.

I cannot thank my parents enough for introducing me to good music and for taking me to concerts, where I have learned so much about myself and the world around me. This is why it makes me so happy to hear about stories like Mason’s. Some of the older classic rock bands are getting to a point where they’re not touring anymore, so it’s important that the next generation is taught about some of the great music of the past so that hopefully they can be seen live before they can’t tour anymore.

To Mason and other young kids getting interested in the music scene and concerts, I say: Rock on!

Read Haley's roundup of upcoming concerts and see all of her blog posts here.