How to be a kitchen angel 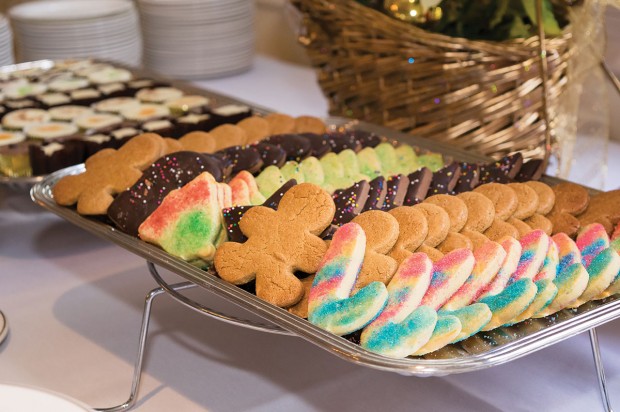 COOKIES A goodie table of desserts is always a satisfying sight, but especially during the holidays. (Photo: The Junior League of Houston)

Cooking Buzz is produced in partnership with the Junior League of Houston, a women’s charitable and education organization founded in 1925.

It’s that time again! While Houston may not be a winter wonderland, signs are all around that the holidays are approaching. Decorations serve as friendly reminders that our to-do lists, along with checkout lines in stores, are getting longer. This also means my home is filled with the smell of holiday cookies baking.

One of my fondest childhood memories is going to my grandparents’ house for the holidays. We would load up the truck and head to Breaux Bridge, Louisiana. Waiting was my grandmother’s “goodie table” – made up with her homemade cookies and sweets. I would run to examine that year’s cookie spread.

As time went on, I tried to learn my grandmother’s recipes – many of which she did by memory. I still haven’t mastered her chocolate chip cookie recipe, and – frankly – I’m afraid I never will.

My mother has her own holiday baking tradition. Before she retired, she instituted “Kitchen Angel Fridays” at her work. Every Friday during December, she would bring a homemade goodie for her co-workers. Kitchen Angel Friday morphed into an almost-every-day-in-December occurrence. My mother and I would look through cookbooks and test recipes for what the “Kitchen Angel” could bring next. This is when I learned to make her own staples – Chewy Brown Sugar Cookies and Treasured Gingerbread from the Junior League of Houston’s Star of Texas Cookbook and her famous Mother’s Creamy New Orleans Pralines from the Junior League’s Houston Junior League Cookbook.

A daughter of one of my mother’s co-workers took a special liking to her chocolate chip cookies, so my mom made a special batch just for her. Even after her retirement, year after year, my mom would make sure that little girl had her own container filled with cookies made with love.

Over time, others joined  the “Kitchen Angel” fun. People of all cultures and religions would share goodies made from recipes that had been in families for generations.

I encourage you to be someone’s Kitchen Angel this year. Try baking a family recipe. If one doesn’t come to mind, start your own tradition! The Junior League of Houston’s Peace Meals cookbook contains some amazing recipes. The Chocolate Snaps and Sugar and Spice and Everything Nice Loaf Bread, along with White Hot Chocolate, are sure to put you in the holiday spirit.