Heading Toward the Future

By Mackenzie McAnear, The Briarwood School, School Buzz Editor | May 9, 2018 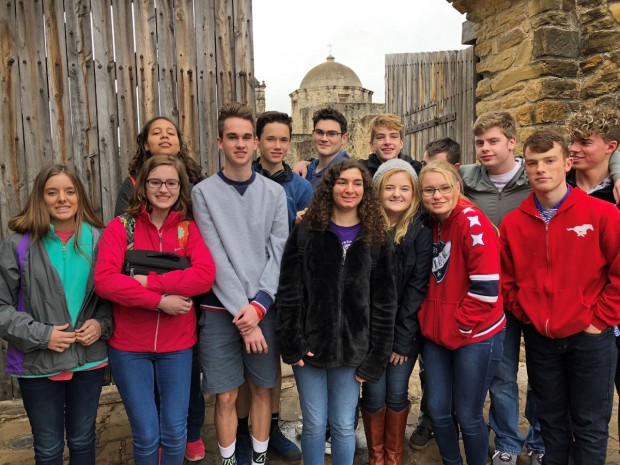 This year, Briarwood’s junior class made its annual college trip to A&M San Antonio, Incarnate Word and Northwest Vista, all in San Antonio, to learn more about their options following high school. On the way to San Antonio, the group stopped by Mission San José for a quick history lesson. Even though it was built in 1782, the museum is still a functioning, living Catholic Church. “The San José Mission was beautiful. I had a marvelous time, and a day couldn’t be better spent,” Jake Upshaw stated.

The college tour began at A&M where their tour guides, fellow students of the university, shared their stories about applying and being accepted. Jack Roche explained, “The tour guides shared their struggles rather than putting on an act, and showed us how to overcome the fears of beginning college.”

Between campus visits, the juniors made a stop for a barbecue lunch and, because no other tours were scheduled that day, they voted to see the movie Black Panther. After the movie, the students enjoyed a relaxing time back at the hotel playing games, watching TV, and catching up on the latest gossip. Lauren Amos recalls her time at the hotel. “I roamed the hotel with Ashleigh, and at one point, everyone gathered in the hotel lobby to play a game of Speak Out.” Grant Baird and his roommate Donny Rica binge-watched The Office on Grant’s laptop.

The next day, the juniors were up to visit two more colleges. “The coffee was a disgrace,” Grant said as he woke and went down to sample the hotel breakfast. On the second day, the group traveled across town to Incarnate Word. Once there, they were escorted around the campus by their tour guides. Wanting to know more, Kate Munson asked one of the tour guides if the college had a microbiology department. Kate later explained, “They are located near a lake so the students take samples from the water and test them from time to time in class.” The juniors parted ways with the college students, and boarded the bus and headed to In-N-Out for burgers.

When everyone was officially stuffed, they boarded the bus for one last college stop. At Northwest Vista College where they were given a tour and introduced to the history that lay around them. After seeing three colleges, the juniors were ready for the long ride back home, but not before they stopped at Buc-ee’s!

Natalie Semine shared her feelings at the end of the trip. “Before the trip, I was really nervous about the prospect of college, but now I feel a lot more confident because I now know there are really good support systems in many colleges.”