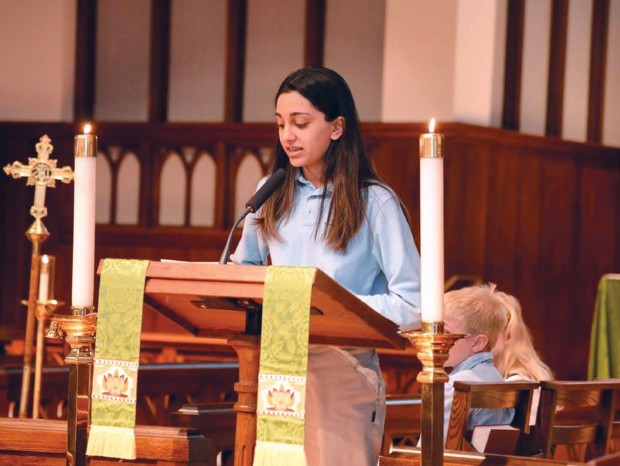 COMMUNITY Dania Siddiqi, a sophomore at St. Agnes Academy, shares her experience being a Muslim in a Christian school. Here, she gives a speech about Islam during chapel at St. Mark’s Episcopal School.

As I anxiously took those fateful steps into St. Mark’s Episcopal School for the first time, a dozen questions entered my mind. There were things I did not know: Would people be nice to me? What do I do during chapel every week? How do I answer uncomfortable questions about my religion? Do you pronounce the “P” in the word “Psalms”? – spoiler alert: you don’t.

Being the new kid and a Muslim in a Christian school prompted a lot of fear in me. For the first time I would immerse myself in a religion I did not know much about, and with people who might not understand much about my background.

Fortunately, St. Mark’s was an incredible community. I am thankful to the classmates and teachers who were open-minded and inclusive. However, there were inevitably uncomfortable situations in which I had to advocate for myself.

For my required school uniform, I wore khaki pants instead of a khaki skirt that other girls wore. The reason for this was that I valued my physical modesty, just as I am sure many other Muslims do. At first, I felt like this singled me out from the rest of my school, and truthfully, it did. I got questions from my classmates on why I dressed so modestly, and although sometimes I was stared at or condescendingly commented on, I was also shown kindness and inclusivity. My physical appearance often set me apart, fostering my unique identity.

In eighth grade, I was called a terrorist by a student in front of my class. When I told my principal, Mr. Garhett Wagers, about it, he handled it with utmost precaution and gave me a choice: either he let me handle it my own way, or he could talk to the student himself. I decided that I felt safer with him talking to the student, as well as having the choice to handle the aftermath on my own. This was one of the first times I had ever experienced direct prejudice against myself, so I wanted to make sure I knew how to handle it for the future, something Mr. Wagers supported me on. What this experience taught me was that although my school had advocated for a diverse, open-minded community, some people will not care to understand who you are. I have come to peace with that, and I have learned to forgive those who insult who I am. Just as I expect others not to generalize my entire religion based on someone’s evil actions, I must also be able to single out one person from a whole community.

During my last year at St. Mark’s, Mr. Wagers gave two of my classmates and me the unique opportunity to talk to an audience about our religions during heritage week, an annual week that celebrated the diversity of our school. I felt nervous as I walked up to the podium. For the first time, I had to speak about a topic that I was so close to, a topic that was intangible and complex. I ended up speaking about an Islamic holiday, Eid, and the traditions and experiences my family and I face during this holy time. Something came to mind as I stood there in front of an audience, watching familiar eyes linger around what I was wearing rather than what I was saying. I was different. And for the longest time, I was afraid that people would concentrate on the fact that I wore khaki pants or stayed in my seat during communion. And yet, talking to the whole school about my religion was my way of personally pointing out my differences, some of which I had previously been insecure about, and inspiring people to recognize their uniqueness.

Currently, I attend St. Agnes Academy. I am amazed and inspired by how loving and inclusive my fellow sisters are no matter someone’s race, ethnicity, religion etc. There is an aspect of the sisterhood here that reminds me of the St. Mark’s community, and that is the ability to celebrate the uniqueness of each child’s background. And although I swapped the khaki pants for opaque, black tights and a plaid skirt, I realize, five years after I took those steps into middle school, diversity means nothing if we do not celebrate it, wear it, talk about it and advocate for it.