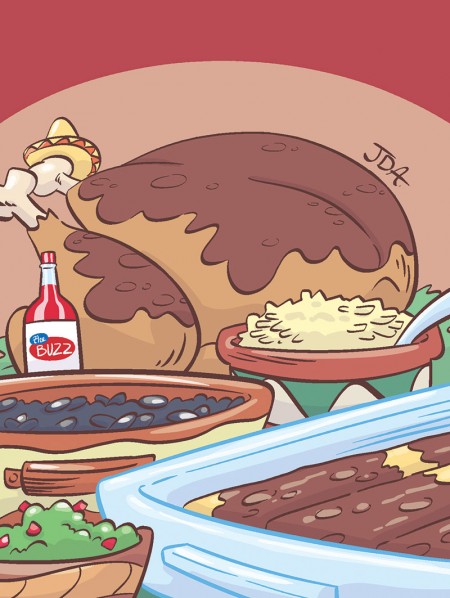 TURKEY FIESTA If you really want to shake up the Thanksgiving table this year, consider taking an only-in-Texas Mexican twist. (Illustration: behance.net/runamokstudios)

For many of us, Thanksgiving is the most traditional – and predictable – holiday of them all. Every family has the turkey, the dressing, the cranberries, and, as I’ve noted in this column in the past, changing the favorites can cause significant family conflict (see Updating Thanksgiving, November 2017).

There are a few, however, who bravely forge new Thanksgiving paths, turning tradition on its head and having a lot of fun in the process.

“Every family seems to have a primal loyalty to their own stuffing or dressing recipe – even the name is debated – never to be altered by the addition of foreign, offending ingredients,” says Mary Nell Lovett, mother to two daughters and five grandchildren, who knows her way around a Thanksgiving menu. “So I would never dare to encroach on protected territory. However, there is another option that can offer a completely different ‘genre’ of cuisine.”

For Mary Nell, that creative twist comes in the form of Thanksgiving Dinner Olé, a Mexican take on the traditional. “I did it once, and everyone liked it,” Mary Nell says. “The sons-in-law, especially so.” Now the Lovetts have a question to answer every November: Olé or traditional?

The idea hatched in 1996, when the family had enjoyed a traditional Thanksgiving dinner in July. “Gratitude and turkeys are not restricted to the fourth Thursday in November,” Mary Nell says. “When we were blessed with the birth of the first of our five grandchildren, I started preparing a traditional Thanksgiving dinner for our daughters and sons-in-law when they came home from the hospital, five different months of the year, summer and winter. There are few times a grandparent is more grateful. Along with being comfort food, the meal was one way to celebrate our thankfulness for the blessing of these grandchildren.” Thanks to that year-round turkey-and-dressing fix, an update to November’s table was approved.

On the Mexican menu: Turkey with Tamale Stuffing and Enchilada Gravy; Muy Bueno Black Beans; Light Spanish Rice; and Avocado, Ruby Reds and Jicama Salad. The turkey recipe comes from The Junior League of San Antonio’s Flavors, which was published in 1978. “It’s my mother’s cookbook,” Mary Nell says, explaining that her mother was a native of San Antonio. The other recipes also have Junior League origins: “My ‘Muy Bueno Black Beans’ recipe is an adaptation of one given to me by my friend and Junior League colleague Claudia Aycock, when we were serving on a Junior League committee together decades ago.”

The Spanish Rice recipe comes from The Star of Texas, the 1980s generation of Junior League of Houston cookbooks. The salad is Mary Nell’s own creation. For dessert, Mary Nell suggests pecan pie, Baskin-Robbins Pralines ‘n Cream ice cream or H-E-B’s limited edition Mexican Hot Chocolate ice cream, but she warns, “The latter is only available January through April, so hoard it in advance!”

Mary Nell serves fried oysters with pico de gallo for appetizers. “I fry the oysters in a cast iron skillet, which started when the sons-in-law came on the scene because they really loved them. They’re eaten up as fast as you can cook them.” Her loose recipe: part flour, part cornmeal, salt and pepper.

On a personal note: I loved Mary Nell’s idea so much that I asked a daughter what she thought about having a Mexican Thanksgiving this year. I was met with silence, then an incredulous, “For our Thanksgiving lunch?”

Maybe we’ll try it in July.