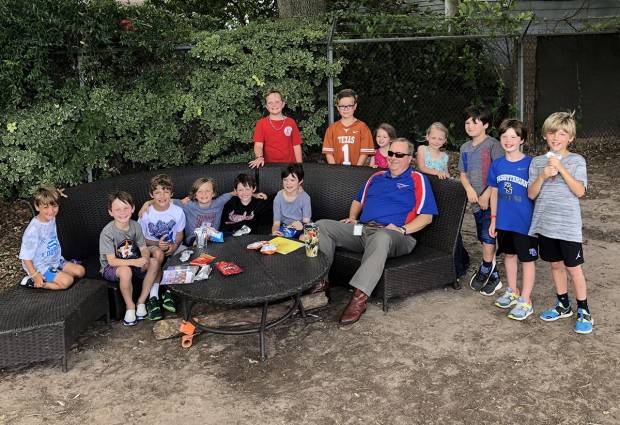 Some West U Elementary School parents used to meet their kids outside the second-grade ramp for school pickup – a great spot because it was behind the building by the baseball fields so kids could burn off some energy before heading home. About mid-year, some students discovered a huge tree next to the Threet baseball field tucked between the field and houses. Once the bell rang, the students headed straight to the tree to play. One of the parents decided to build steps and make flags and, eventually, the “treehouse” was born. WUES students started begging their parents to pick them up at the treehouse and neighborhood kids started riding their bikes there after school and on the weekends. Parents began gathering too, donating old furniture to create a place to hang out and order pizza, play board games and enjoy happy hour while their kids played. Since WUES principal Mr. John Threet retired this year, students decided to let him in on the secret, nervously showing him “The Threet Box” by the treehouse. Their former principal jokingly said he wished he would’ve known about it earlier, so he could’ve sneaked over for some quiet time during school days. Pictured are (front row, from left) Landon Lowery, Ford Laird, Cooper Morrison, Alex Hulsey, Grayson Parker, Bennett Parker and principal Threet; (back row, from left) Timothy Davidson, Finn Parker, Anna Katherine Hulsey, Austyn Laird, Cole Stagg, Ben Stagg and Judson Morrison by the “treehouse.”

Eight WUES teachers and staff retired this year, including Principal Threet. See details and photos from the community celebration here.

Be seen in Buzz About Town. Send your high-res photos and community news to [email protected]. Items are published on a space-available basis. Also share your upcoming-event here.