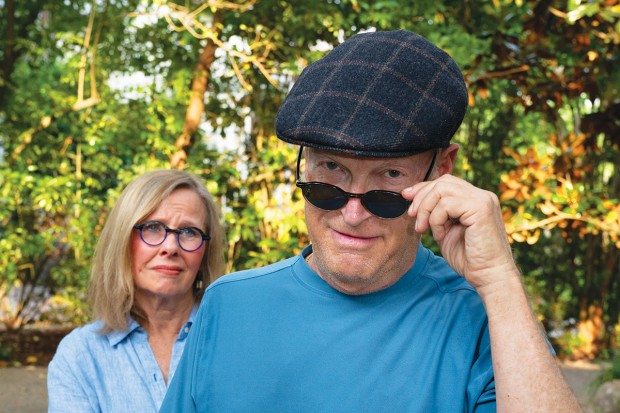 If there is one thing I have learned in this series on Stan, it’s that a lot of people read The Buzz Magazines. Now that I know that you are reading closely, I will have to be more careful about what I write, lest Stan-the-Man becomes a mini-series, we get rich, we turn to drugs, have affairs, go broke, and it all ends badly.

Stan seems to be the one getting the most attention, with “Stan-the-Man” comments from friends, clients and strangers. On a recent checkup his doctor offered the observation that Stan was becoming “a big deal.”

He seems to be checking himself out in the mirror more and asking questions like, “Are my pecs too big for this shirt?”

This makes me want to say, “No, but your tummy is.”

I’m starting to worry that all of this attention is going to turn us into a couple of bores, and this series will become The Game of Groans.

Back before he was famous, a couple of months ago, this relationship was getting pretty darn nice. There is a total of 130 collective years between his 66 and my 64 years on the planet, mostly in the same city.

The conversation range is limitless. It goes from where we were when Kennedy was shot to childhood memories of Albritton’s Cafeteria. Our parallel universes, with kids roughly the same age, probably means we were at Gymboree at the same time without knowing it.

We both remember being among the crowd of parents who discovered the very first Lupe Tortilla tucked inside a wooded area where you felt like you were in the country when you were actually a block from I-10 and the Beltway. It was the one place parents could go and drink margaritas while their kids played in a sandbox. It was so popular, bleachers were added, where we would visit, sip and “supervise.”

For the past year, Stan and I have done the friend meeting circuit. When I thought of my true touchstone friends, outside of the Lupe Tortilla crowd, they are mostly out of town. What’s with that? Most of the people in my life either die or move.

So, we’ve done some traveling, which Stan likes, especially if you live near water. But even if you don’t, he wants to know you. He wants to pepper you with questions. It almost feels like he’s prying if you don’t understand the compliment that he is just interested in who you are.

I’m ashamed I didn’t know some of the things I learned about my friends after Stan’s in-depth interviews. Then, he wants to know how they are doing weeks later, as if I kept up with them minute to minute.

Stan is that kind of friend. His friends go as far back as his early childhood. They rise and fall, like a collective wave, with the ups and downs of Houston sports teams. Sometimes they actually go to the games. But mostly they just text or call in the middle of an inning, or quarter and lament some play or call. Stan may not be watching the game, especially if they are losing. But he always knows the score.

That’s the thing about Stan. In one way or another, he’s always living in the moment. I have read The Power of Now, and even spent a week in a hut in the woods in upstate New York to listen to the author Eckhart Tolle express the subject in a fascinating way. I fully planned to get around to living in the present moment, later.

But now, Stan is driving me into the present moment, whether I’m ready or not. His whole life is in the now. He makes sure his weeks include lunch with a friend or three. If they don’t have lunch, he will likely at least know what they had for lunch. By now, I suspect they even know what I had for lunch.

Not to my credit, I don’t care what anybody had for lunch. My friends are well aware that I can dive into a cave and disappear for days, weeks and even months. Stan is making me, I think, a better friend, now.

But as for his friends, some are starting to question this local celebrity thing. A text from his old UT roommate Ronnie Spolane asked him to try to remember who his “true friends” are, warning that “the media will build you up, then tear you down.” To which Stan replied, “Ronnie, if you have anything more to say to me, call my agent.”

Looks like we need to give this topic a rest a while, or I might just find myself back to online dating. On the other hand, we could just go for the mini-series, hit the top and spiral down. Then I’ll write about it. They say bad decisions make great stories. Maybe I’ll call Stan’s agent.