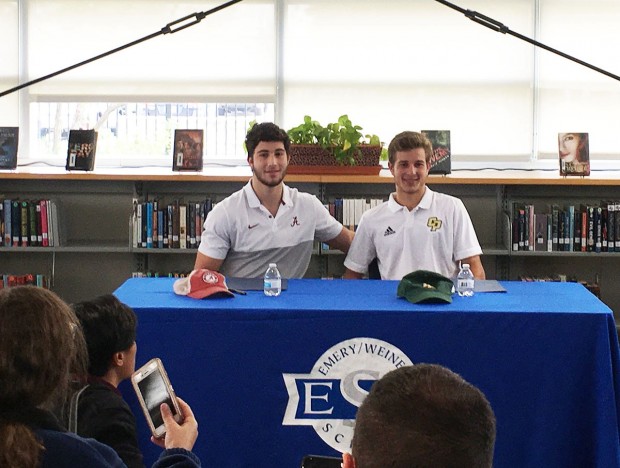 Peter Berry (on left) and Noah Berry (on right) put their college caps on and smile after they signed their letters of intent to play at D1 programs.

On Nov. 13, cousins Peter and Noah Berry both committed to the University of Alabama and Cal Poly University respectively to further their outstanding athletic careers. Peter will go on to play Division One wheelchair basketball, and Noah has opted for Cal Poly’s top-notch Division One tennis program.

Noah is a five-star recruit who ranked top 30 nationally, and has helped the varsity tennis team to three TAPPS 5A championships. He holds the state record for most Tate championship wins and appearances in Emery history. Peter is also a five-star recruit in men’s wheelchair basketball program, becoming a pioneer of the sport and an inspiration to young kids with disabilities and paralysis. He has received an invitation to play for Team USA in 2019-2020 to compete nationally with fellow five-star recruits. Peter has been a team captain and the motor that has propelled his Hot Wheels team to three national championships. Peter was named the National Wheelchair Basketball Association League MVP in 2018, topping off an outstanding repertoire of feats.

Both of the boys cite their family as inspirations to persevere through adversity and would like to thank their family for making this possible. Noah went on to say, “I was dealing with some injuries at one point, and I began to get down on myself. Then I saw Peter in the gym working hard, and another young man playing basketball with only one arm. I began to ask myself, ‘What’s my excuse? I wanted to accomplish more, and his passion makes me hungrier.” Peter spoke highly of his family on and off the court as well. ”I couldn’t have done it without the people I was surrounded by - my supporting cast – my Coach Trice Ham taught me to stick my chest out and keep my head up, and that’s really the only option I had," said Peter Berry. ”We live under the same roof and we’re doing this together and it’s pretty remarkable and I’m just grateful to have him there and share this experience with someone.”

Peter’s basketball mentor and friend, Coach Trice, spoke highly of Peter’s character. “Peter always made sure his younger teammates who didn’t see much playing time were just as important as the starters. He is truly a remarkable person and young man.” Their nonprofit OLIE, One Life is Enough, has elevated the boys’ perspective past sports and into philanthropy. Over the years, they have traveled to the Capital in Austin to make distracted driving a priority within our state legislature. Not only are both the Berry boys an outstanding example of character on the court, but their devotion to educating the world about what they've went through signifies the unprecedented charisma of two young men.

Read more about the Berry family's fight to help pass the law against distracted driving.