An Early Thanksgiving for the Nathans: Mandy Receives a New Heart 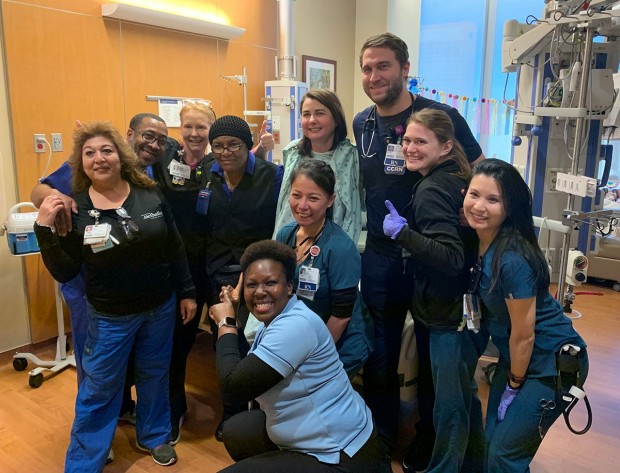 Mandy Nathan takes a moment to thank the staff in the Cardiac Intensive Care Unit at Houston Methodist Hospital before going in for heart transplant surgery on Sunday. (Photo: David Nathan)

After spending 151 days on the heart transplant list, Mandy Nathan received a new heart from an anonymous donor on Sunday, Nov. 10.

It was about 11:15 p.m. on Saturday when a nurse came into Mandy’s room on the 10th floor at Methodist Hospital, where Mandy had undergone a series of treatments since facing heart failure in May. The nurse informed Mandy that the on-call doctor wanted to discuss a “potential offer” with her. Soon, Methodist cardiologist Barry Trachtenberg was on the line, telling Mandy about a potential match. The donor was on life-support in an undisclosed location, and only with Mandy’s permission could Dr. Trachtenberg send a surgical team member to examine the heart. If viable, the heart would be transported to Houston and immediately transplanted to Mandy’s chest.

“They said [the donor] was a young woman who didn’t live in Texas,” Mandy, a former Bellaire City Councilwoman, later shared. “The doctors said the antibody match was as good as they had hoped for. The whole team thought this was miraculous.”

With Mandy’s consent, a member of the transplant team traveled to check whether the heart would be viable. In the meantime, Mandy called her husband David to share the hopeful news.

David could hardly believe what he heard.

“Nobody gets good news at midnight,” said David, a high school English teacher at St. John’s School. “You almost can’t believe it. It’s just one of those things that it’s all you think about until the point where you just stop thinking about it.”

David had, in fact, put the idea of a donor match out of his mind for the past few weeks. Mandy had such high antibody levels that finding a match without first lowering her antibody count was nearly impossible.

Her doctors, and David’s thoughts, were focused on getting her antibody levels from 99 percent down to 95 percent. (While antibodies typically help people fight off infection, high levels make it difficult to accept foreign tissue.) Just last Friday, Mandy completed the eighth dose of an experimental drug doctors hoped would help with this.

Fortunately, they never have to know whether that drug did its job. Good news – miraculous news, really - came in at around 10:30 a.m. on Sunday. The donor heart was a match and the transplant procedure could move forward.

Everyone immediately sprang into action, David recalls. By 1:30 p.m. on Sunday, Mandy had said bye to everyone on her floor and was in the operating room. Thirty minutes later, the heart arrived at Methodist Hospital via helicopter. And by 6:30 p.m. on Sunday evening, Mandy was in recovery.

While Mandy knew the odds of a match were low, it was only after the surgery was completed that the true miracle of it all sunk in.

“One of my doctors came in yesterday and said, ‘Do you want to guess what the chances were of you getting a heart like this?’” Mandy recounted. “David guessed maybe 1 in 500,000. [The doctor] said it was actually one in 5 million.”

Just as the Nathans were trying to wrap their heads around these miniscule odds, so too were community members.

“[My husband] and I were just so happy and shocked in the best way possible,” said Carla Dawson, whose husband Cole received a heart transplant last August. “I could not sleep Sunday night. I thought, my God, we’ve experienced another miracle.”

Two of Carla and Cole’s daughters were in David Nathan’s English class at St. John’s, but it was only over the summer - when Mandy was put on the transplant list – that the Dawsons and the Nathans connected.

“I share something with Mandy that I don’t share with anyone else I’ve met or know,” Cole said, adding that he’s often greeted with jaw-drops when he tells people he had a heart transplant. “I had leukemia, and I know lots of other people with leukemia. I had my thyroid removed, and I know people who had that. Mandy is the only one I know who I share a heart transplant with.”

As I spoke with Mandy, only two days after her intensive surgery, she expressed deep gratitude towards the donor’s family and clearly recognized the poignancy of her situation: Nov.  10, while miraculous for Mandy’s family, was simultaneously devastating for someone else’s.

As David shared on CaringBridge, a site where Mandy has been providing updates with friends and family: “Thanksgiving definitely came early this year.”

Editor’s Note: Mandy celebrated her birthday with well wishes from her family and the community this summer. Read more about her experience awaiting the heart transplant here. For more on this topic, read Braveheart: Giving thanks for a giving heart by Jennifer Oakley on Cole Dawson, who is thriving after receiving a new heart in August 2018.