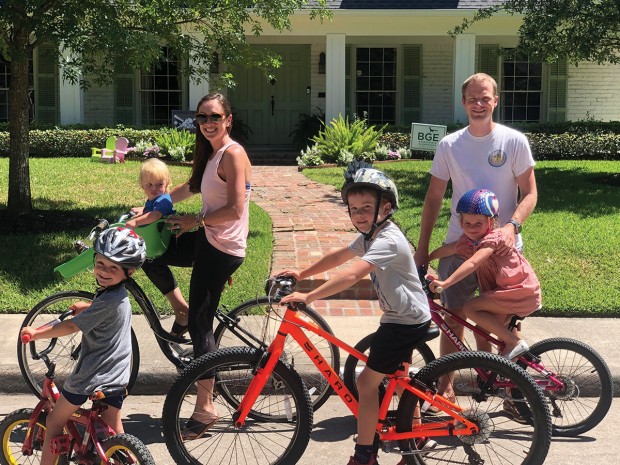 HOW WE ROLL The Verly family – parents Nancy and Thomas, along with Sebastian, 8, Olivia, 6, Reeves, 4, and Hugo, 2 – take a daily family bike ride through their neighborhood.

Family bike rides have always been a thing. But now, thanks to the pandemic, they’re all the rage. Neighborhoods are bustling with bikes. There are even bike shortages at retailers.

Bike rides are a way for families to get out of the house for some exercise and fresh air while maintaining social distance. With handy contraptions like bike trailers and bike seats for babies and toddlers, everyone gets to go.

Helen Bernard searched for a bike online for her husband Will’s birthday in May. The couple have a 16-month-old son named Whit, and she planned to get them a bike and a bike trailer. It wasn’t as simple as Helen thought it would be.

“Finding a bike for Will was like finding a needle in a haystack,” she said, laughing. “I finally found one online at Walmart, but after ordering it, I got an email later that it was out of stock.”

Helen spent half a day driving around Houston to various bike shops, searching for one that was freshly stocked or even one that was returned. She located a bike and purchased it. Shortly after, to her surprise, she received an email from Walmart: “Your order has shipped!” it read.

Rather than return the second, she listed it for sale on her local Facebook buy and sell group. “I had, like, 20 comments of people wanting to buy it,” she said. 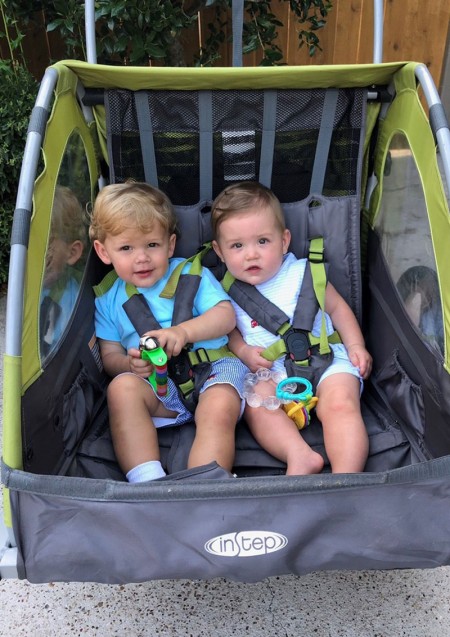 JOY RIDE Toddler cousins Wells Smith and Whit Bernard (from left) ride around the neighborhood in the family’s bike trailer.

Helen and her sister Julia Smith, who has a 2-year-old son named Wells, now often cook dinner while their husbands pull Whit and Wells around in the bike trailer. Everyone is happy.

A bike-trailer ride with two toddlers can have a lot of moving parts, starting with snacks. “We learned the hard way to not put shoes on the boys,” said Helen, laughing. “We have had instances of them taking them off and throwing them along the way.”

Another Buzz family soaking up the extra family bike rides are the Verlys. Nancy, her husband Thomas and their four kids, Sebastian, 8, Olivia, 6, Reeves, 4, and Hugo, 18 months, have always been “a bike family,” says Nancy.

Thomas and Nancy started to teach their kids young on balance bikes – bikes without pedals that teach riders to balance. Their kids can all ride bikes – except for Hugo, who’s not yet 2.

Every morning, the Verlys wake up, have breakfast and head out for a morning family bike ride before the day of work and school begins.

Nancy says she’s always on her toes when they are out riding, and she has taught her kids to be alert as well. “If we are crossing San Felipe, we count to five after the crosswalk sign is lit, just to make absolutely sure there are no cars running the red light.”

Hugo rides in a unique bike seat on the front of Nancy’s handlebars. She picked it up when her oldest, Sebastian, was a toddler. “I never really liked the seats in the back because I wanted to see him and chat with him,” said Nancy.

She and Thomas had seen them in Belgium, where Thomas is from. “Everyone rides bikes everywhere in Belgium. I had not seen the seat in Houston. We gave up but happened to be in REI one day, and they had the seat. It has lasted us through four children,” said Nancy. The Verly’s bike seat is the iBert by Kazam Safe-T-Seat. It runs around $110.

The family of six recently went on one extra-long and memorable family bike when all six rode from Briargrove to Memorial Park and back, about eight miles in total. Nancy rode in front, and Thomas stayed in the back, and they stuck with neighborhood streets until they reached Woodway.

“My 4 year old didn't even complain,” said Nancy. “He rode circles around us and wanted to keep going even after we got home.”

As time goes on and neighborhood streets become a little too familiar, you may want to load up the bikes and explore some of the Houston area’s best cycling trails.

Editor's note: For more, find a list of bike trails around Houston here.