Welcome to Your Crisis 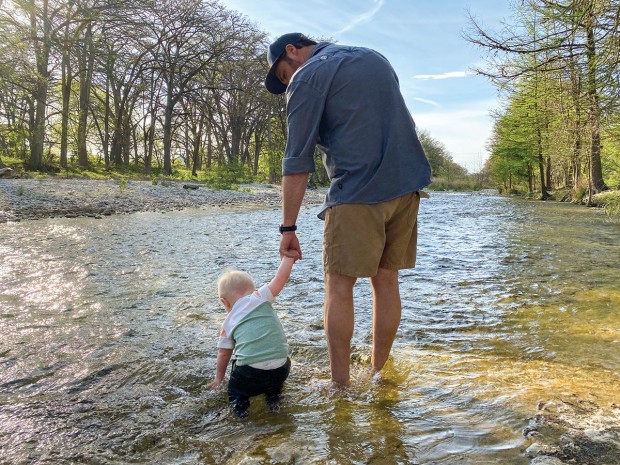 TAKE ME TO THE RIVER The Frio River provides a peaceful out-of-the-house moment for Eli-the-Guy and Morgan Weber.

I’m confused. If this is the worst crisis in human history, why am I leisurely walking the dogs, having afternoon Zoom disco parties and evening FaceTime cocktail parties, and binge watching Breaking Bad?

Is this my same neighborhood? The first morning I stepped outside to no traffic noise; the sounds of children’s voices, backed up by a bird chorus, entered the air. It was surreal enough already, when the sound of a distant trumpet joined the atmosphere.

Is this still Earth? I looked at my feet. I’m still alive. The trumpet was probably just some student at home practicing a band instrument.

Are these masked strangers walking by, my neighbors? We are keeping our distance, but our smiles and eye contact seem to be reaching out to make a connection. I want to see in someone else’s eyes that they are doing okay. If they are okay, then I’m okay too, right now, I think.

A young apartment dweller glides a sudsy sponge along his car, with no more sense of urgency than the lazy oak that shades him.

“That looks rather pleasant,” I say. He smiles and nods, relishing the moment.

If he had the option of hopping a plane to an exotic beach right now, he’d be busily planning and packing. Instead, he is confined to feeling the cool texture of suds and the simple satisfaction of the work of his own hands on a shady, breezy, weekday morning.

“Bliss is everywhere. We just don’t have the attention span for it.”

I didn’t have the attention span to write down who said that, but I read it somewhere and wrote it on a recipe card.

I can hear my nails clicking on the keyboard of my laptop. At some point, if I don’t cut my own fingernails, I won’t be able to finish this piece.

As I write this, daughter Julia and her young family of three (with another one on the way, yay), are arriving at her husband Morgan's family house on the Frio River in the Hill Country for some recovery time.

They are among Houston’s weary restaurant owners, in their case, responsible for the future of 200 employees. For those in the restaurant business, it has taken the focus of air traffic controllers, with pits in their stomachs, to manage the last few weeks.

There is plenty of uncertainty ahead. But they have done all they can from Houston.

They just want to get away and be a family now. It’s the first time Eli-the-Guy is old enough to actually experience the haven of his father’s childhood and be awed, in his own toddler way, at his first glimpse of the shallow river stream that trickles past the backyard.

“I told Morgan I’m already anxious about returning to our normal lives,” Julia said. “Our goal is to be able to live more this way: cooking every night, spending lots of time outside and together. It just feels right.”

Vietnamese Buddhist monk Thich Nhat Hanh often tells stories that illustrate how one calm person can transform a situation. He tells about the many Vietnamese people who fled in tiny boats across treacherous seas as the war was ending.

While some boats were lost at sea, there were also those who lived to tell their stories. They would inevitably include tales of almost being lost at sea, in storms that would put the whole boat in panic mode.

Then, just as they were on the brink of disaster, one person would become calm and relax in the storm. Soon, others would pick up on the calm and stop fighting against the motion of the storm, until the boat found quieter waters.

I want to be that calm rower in the storm. We’re all in the same boat. We need all the calm rowers we can get.

There is another story of a group of young people talking and laughing while walking through the rubble of their war-torn town. A passer-by noticed them and asked, curiously, how they could possibly be laughing while surrounded by so much misery.

“Happiness is all we have left,” they replied.

Wouldn’t it be amazing if there were actually a way to be calm in the midst of all this?

I’ll leave you with a few more pointers from my recipe cards.

“It takes three things to attain a sense of significant being: God, a soul and a moment. And the three are always there.” – Rabbi Abraham Joshua Hershel

“The wilderness holds answers to more questions than we have yet learned to ask.” – Nancy Wynne Newhall, best known for putting words to Ansel Adams photographs.