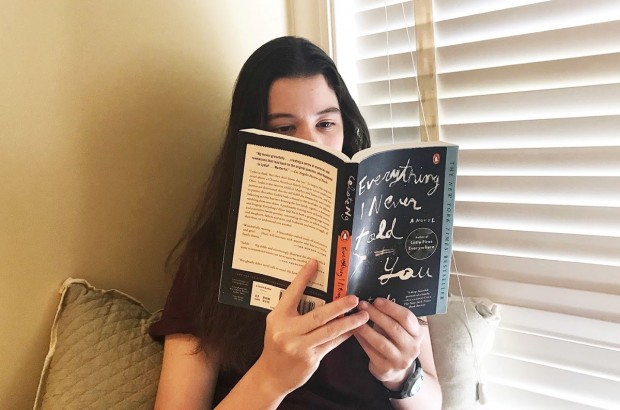 Abigail Poag, a rising senior at St. John's School, recommends Everything I Never Told You by Celeste Ng.

I love to read but during the school year, I often feel too busy to sit down and enjoy a book. I tend to read a lot more during the summer. Here are 10 fun recommendations for teens to consider this summer, including some of my personal favorites.

Rhea Kamat, a rising senior at St. John’s School, recommends A Man Called Ove by Fredrik Backman. This fiction novel features an old, grumpy man whose life changes when a young family moves in next door. Rhea says she loves this book because it is “simultaneously heartwarming and heart-wrenching” and it “teaches the reader that life can get better and that people can be redeemed.”

Abigail Poag, a rising senior at St. John’s School, recommends the novel Everything I Never Told You by Celeste Ng. Set in the 1970s, this story is about a Chinese-American family who loses their favorite daughter. Abigail says, “Everything I Never Told You is serious and thought-provoking while also being impossible to put down - I think I read it in one or two sittings. The characters are all interesting and flawed, and I fell in love with Ng’s writing. The book made me cry more than anything I had read in a long time.”

Maggie McCarthy, a rising senior at St. Agnes Academy, recommends the historical fiction novel Fountains of Silence by Ruth Sepetys. Set in 1957 in fascist-controlled Spain, the book follows 18-year-old Daniel, a photographer and the difficult decisions he must make to protect those he cares about. Maggie says she loves the book because “it’s very well written, and because it’s told in alternating perspective you don’t get the full picture/know the truth until the very end.”

Katherine Ochs, a rising freshman at Memorial High School, likes Love & Gelato by Jenna Evans Welch. In this fiction novel, the main character, Lina, is going to Italy for the summer because her mom’s dying wish was that she gets to know her father. Once there, she discovers her mom’s old diary, which leads her to uncover a shocking secret. Katherine says she enjoyed this book because it is “full of surprises.”

Here are a few of my personal favorites, all of which are YA fiction: