Growing Up in Riverbend

A neighborhood where everybody knows your name 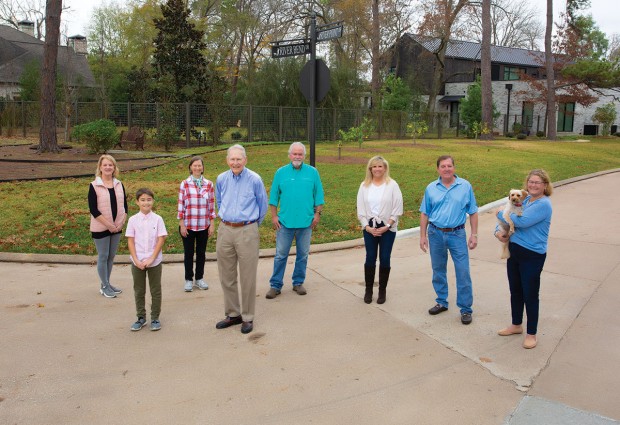 WE ARE FAMILY Melinda Abell, Cynthia Lange, Sam McBirney, Kelley Austin, Brian Austin, Helene Brechan (from left, in back), and Axel Brechan and Wesley Parker (in front) are some of the many neighbors who love life in Riverbend. (Photo: lawellphoto.com)

The houses are definitely nice here. Some are original 1950s ranch-style homes, and others are traditional two-stories flanked by manicured lawns. Location is another perk. This is smack dab in the middle of Houston, cradled by Buffalo Bayou, so it’s not unusual to see a great egret gliding along. This neighborhood in Hunters Creek Village, called Riverbend, is a unique enclave of 65 large lots with expansive homes, sweeping driveways, and winding streets.

But what makes Riverbend special for those who live here, they say, is the comfort of knowing everyone’s name.

“We are a special community of friends and neighbors,” said Melinda. “We walk together and support one another through the good times and the tough times. Childhood residents have come back to raise their families in this special place.”

Riverbend is a hidden gem, walled off by bends in the bayou and a brick wall along Voss Road. Some homes appear perched on graceful promontories while others are nestled under trees. In many ways, the neighborhood looks like a nature preserve, in contrast to the crowded strip centers surrounding it.

At 90, Wesley Parker is one of the oldest original residents of Riverbend. An administrator with Baylor College of Medicine, he built his home 55 years ago with his wife, Suzie. Back then, Voss Road wasn’t even paved. His wife passed two years ago, but Wes says he doesn’t feel alone.

“Neighbors are out walking all the time. That's how I keep alive, visiting with the neighbors and walking a mile around the block twice a day,” said Wes. “My wife always used to say that we didn’t know when we moved here that this place was our own Camelot.”

Vicki and John Lange bought their home in Riverbend 34 years ago, two doors down from John’s childhood home. They raised three boys there and now have more extended-family members living in the neighborhood.

“It’s just like our own little town where we know everybody,” said Vicki. “We've ended up being the best of friends with all these people that we probably never would have run across in our paths because of our kids being different ages. It’s just a real special place.”

Greta Zimmerman has owned two homes here in 20 years, downsizing from a two-story to a single-story home one block away after her kids went to college. “I didn’t grow up with this. I moved 13 times growing up, overseas and in the U.S.,” she says, “so I can really appreciate it.”

The Zimmermans’ second Riverbend home was about 50 percent renovated when it flooded, along with half the neighborhood, during Hurricane Harvey in 2017. 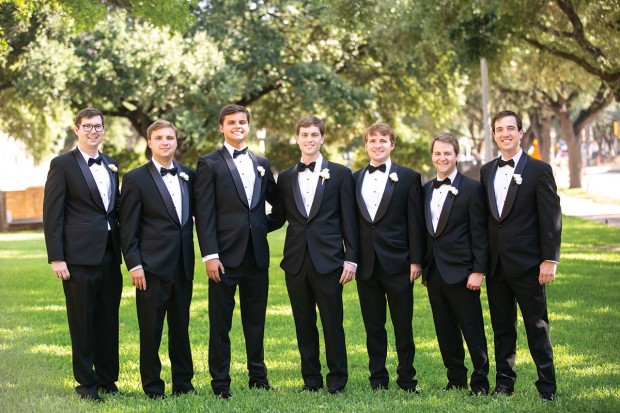 “Our neighbors poured in to pack and mark boxes, then move and unpack us,” said Greta. “This community looks out for one another, looks for what is needed, and then acts.”

Some of the homes have been torn down and rebuilt since Harvey, but the essential nature of the neighborhood hasn’t changed.

Ten years ago, The Buzz Magazines ran an article, Riverbend Boys, about a group of high school seniors who grew up together. Last year, many of those same boys reunited as groomsmen in Miles Abell’s wedding.

“Growing up in Riverbend was a gift. I miss the community that surrounded us, but in a way it is with me wherever I go,” said Miles, who is now a lawyer living in Austin with his wife, Katie. “I am blessed with happy and wonderful memories of the neighborhood. The Riverbend guys are my brothers – my lifelong companions. When we are together, it feels like home.”

Susanna Kane, a nurse, treasures the childhood experience her kids had here and compares it to the perks of growing up in a small town.

“It makes a difference when you know everyone in the neighborhood. We know most people’s parents and grandparents because they lived here. There are lots of multi-generational families. It just seems like that’s always been so important. We even know everyone’s dog’s names. That’s just how familiar we are,” said Susanna.

It seems like everyone knows the house Martha “Tita” McBirney Cavness and her family lived in. The family has owned the home since 1969. Tita passed a few years ago, but her oldest son, Sam, a property-insurance underwriter, is among the latest to come full circle, moving back to the neighborhood with his wife, Molly, in August. They had to tear down the family home after Harvey, but they built a large, new home. They even bought the lot next door and had it landscaped with a bench for the whole neighborhood to enjoy. 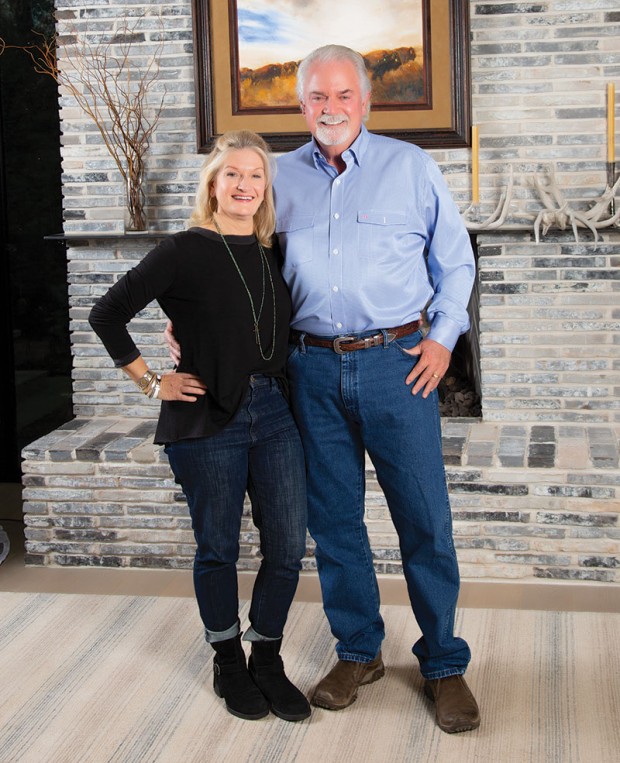 Molly and Sam McBirney recently moved back into a newly built home on the same lot where Sam lived as a teenager. (Photo: lawellphoto.com)

“Everyone loves having Sam back,” said Molly McBirney. “We knew that it was a unique, special neighborhood, and we always wanted to be here.”

While “for sale” signs are rare, younger families are gradually finding their way in.

Helene and Jacob Brechan moved to Houston 17 years ago from Norway for Jacob’s job. They discovered the neighborhood and bought their home in 2010 when their youngest son, Axel, was born.

“We fell in love with the house and the vicinity of my husband’s work,” said Helene. “It made sense for us to live here, but then we discovered the people here were different. They invited us to the annual Halloween party. Three days after we moved in, we started getting dinner invitations. That’s when we knew we were in the right place.”

Neighbors say their affection for this charmed sanctuary runs as firm and deep as the roots of the live oaks that shade its homes and streets.

“I’m like, ‘Nooooo! I can’t leave this neighborhood.’ I’m looking forward to all of us growing old together.” 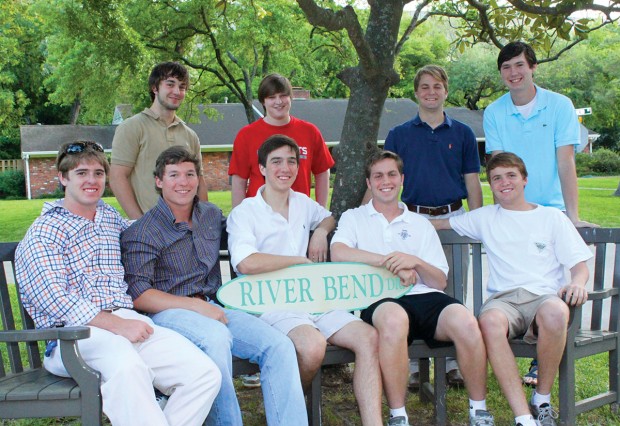 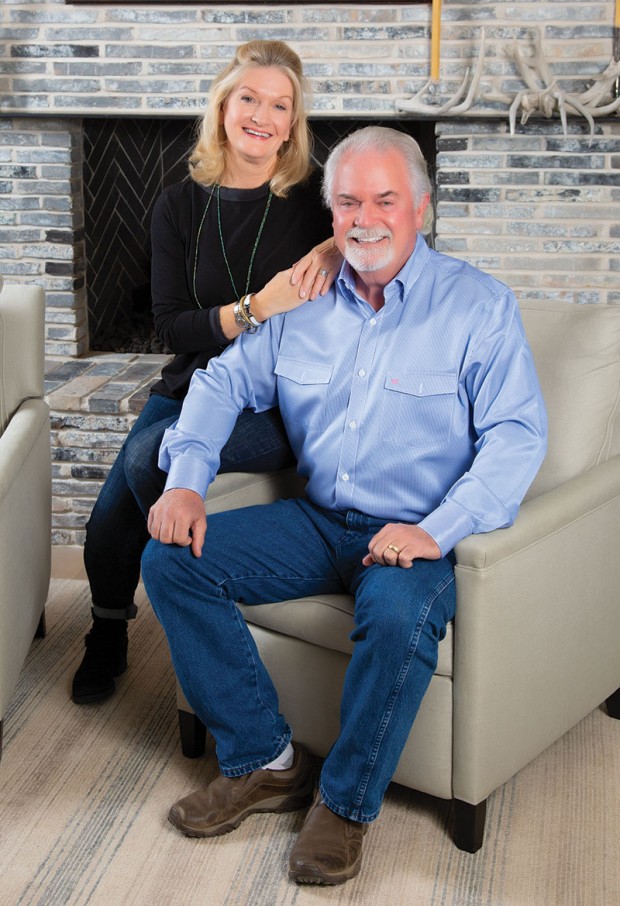 Molly and Sam McBirney recently moved back into a newly built home on the same lot where Sam lived as a teenager. (Photo: lawellphoto.com)