After an illustrious high school basketball career, including accolades as Best Senior Player in his county, Joe was thrilled to become a student at UK and watch his beloved Wildcats in person. He also discovered something he liked even more than basketball – a cute Wildcat fan named Barbara Sutton, who became Mrs. Joseph Cowles in 1965.

After receiving his doctorate in Science, the couple headed south to start Joe’s career as a biology professor at the University of Houston in 1971.

“College basketball has been my favorite sport ever since Dad started taking us to U of H games at Hofheinz Pavilion," Dan shared.

“As a kid growing up in the 70’s and 80’s I loved the Phi Slama Jama days. I even had posters on my wall," added Richard.

“Loyal is the best word to describe my father’s approach to being a fan," Rich shared. "We went to games and watched the Cougars no matter how talented or successful the team was. We were always there to cheer them on."

“I think he took a little extra time with me since I was a fellow lefty," Richard said.

Joe coached his sons, and dozens of others kids, in the Willow Meadows Baptist youth league. The brothers proudly donned red and white jerseys for the Bellaire High School Cardinals. The fans were great, especially the English teacher who came to every game, also known as Mrs. Cowles.

“Mom was a big support and always made sure to let the refs know if she disagreed with a call," Dan recalled.

“We rolled and went undefeated. Wish I could say it was the coaching, but it was the boys that played so well,” shared Dan, excited.

Richard, who also followed in his mother’s steps and became a high school teacher, has coached his 11-year-old twins and high school daughter. This season, she played varsity as a freshman. Richard was almost as proud as her grandparents.

Dan recalled going to NCAA tournament games in Houston over the years.

“I saw Baylor play Duke in 2010 during the Elite 8. Then my dad and 7-year-old son joined me at the 2016 championship where Nova beat UNC with a buzzer beater," said Dan. "These days, it's fun to watch games with my two sons and my daughter and occasionally my wife. I always enjoy being in my brother-in-law's March Madness pool and think this is the first year everyone in the family will have a bracket."

Richard and Dan are still Houston Cougar fans, but they also root for their own alma maters - Richard for the Texas Longhorns and Dan for the Baylor Bears.

Seven total Texas teams will compete in March Madness. Those schools are Houston, Baylor, UT, Texas Tech, Texas State University, North Texas, and Abilene Christian. "Going to the big dance” may need to be changed to “two-stepping to the big dance.”

Super fan Joe explained his college basketball loyalties. “Richard, is a UT grad but our other son, Dan, is a Baylor Bear. So I have two dogs in the hunt. I grew up in Kentucky so my first love is Kentucky, but they did not make the tournament. I worked at UH for 20 years, so I am a Cougar fan, as well. And then I taught for 18 years at Virginia Tech, so I also like the Hokies. You could say I am more of a renaissance fan.”

Joe looks forward to cheering on the Longhorns, Bears, Cougars, Hokies, and hopefully Kentucky in 2022.

Bring on March Madness 2021! Good luck to your teams and your brackets. Happy 75th Birthday to UH basketball and go #2 Seeded Cougars!

Editor's note: Read more about loyal Cougar fans in this March Madness article from 2019. Do you a bracket filled out and ready to go? Read about brackets and March Madness fans here. Tune in for the big game on Friday as UH faces Cleveland State. 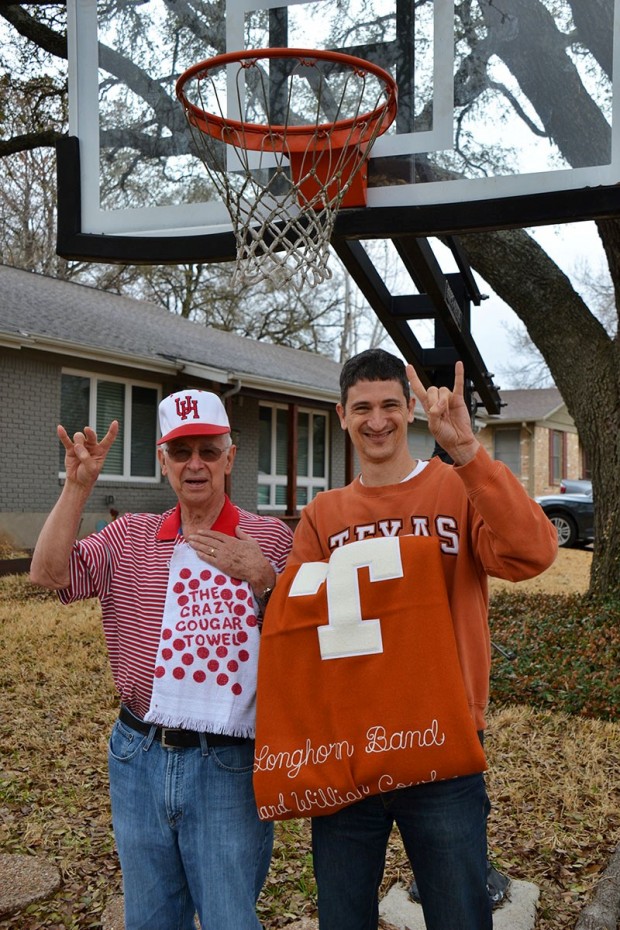 In their Cougar red and Longhorn burnt orange, Joe and Richard Cowles are fired up and ready to watch Houston and Texas win. 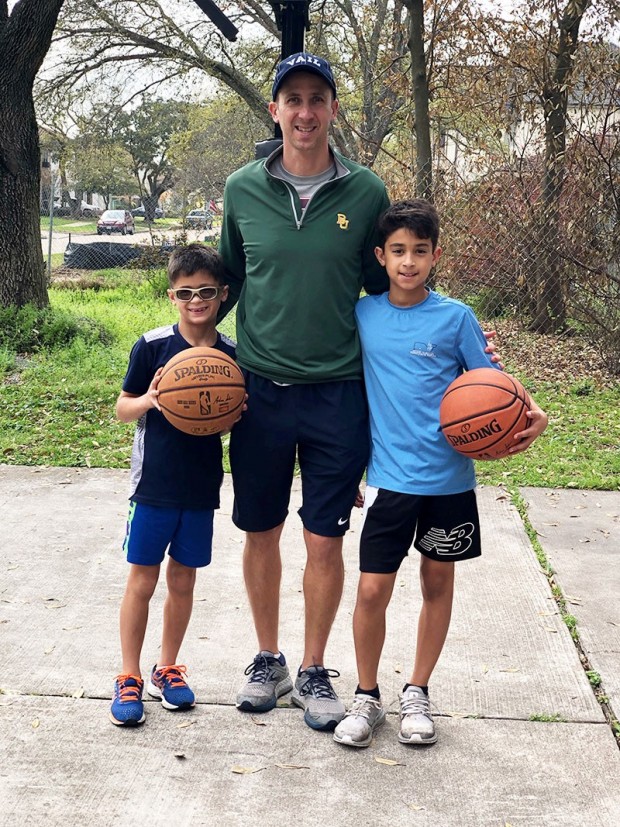 Dan coached his 9-year-old son’s Bellaire rec basketball team that won their age bracket this year. He’s hoping that his #1 seeded college team, the Baylor Bears, will be on a similar winning streak. 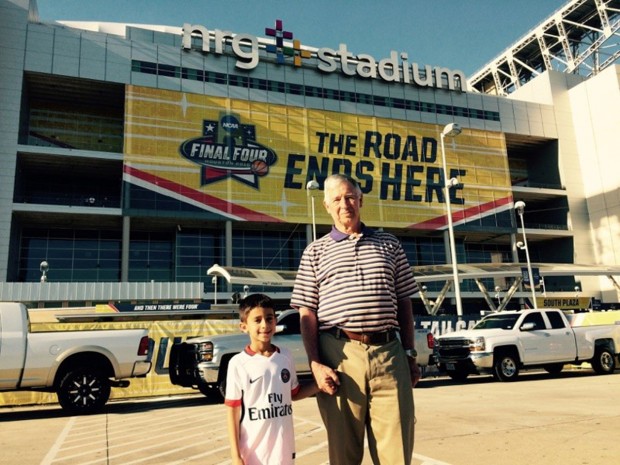 Joe Cowles and his grandson enjoyed going to the 2016 NCAA Championship at NRG Stadium and seeing Villanova beat the University of North Carolina. 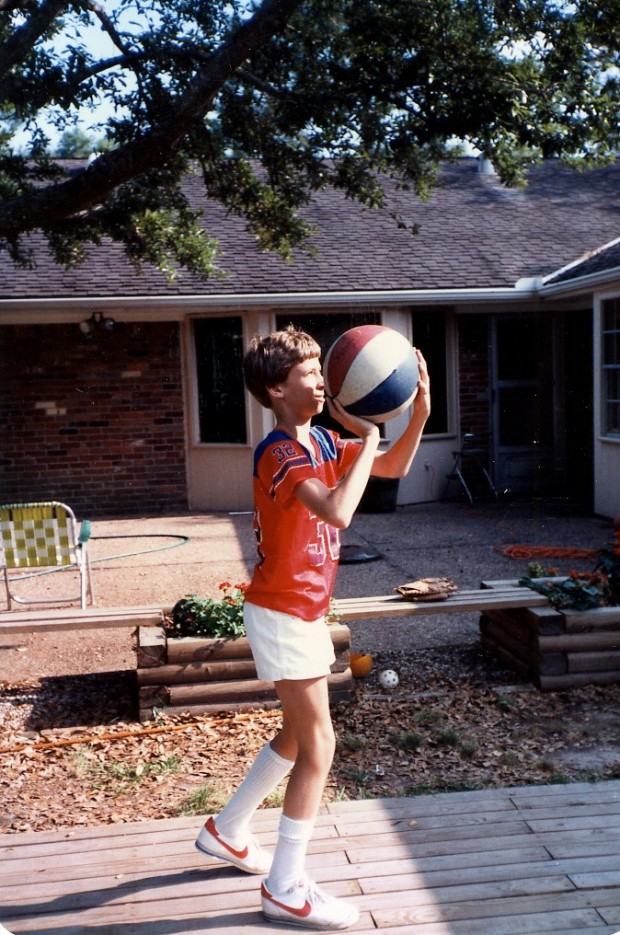 Dan practicing his Phi Slama Jama moves. Richard has fond memories of helping his dad build a 20 x 20 basketball court in their backyard on Jackwood and said it was the best court he ever played on. 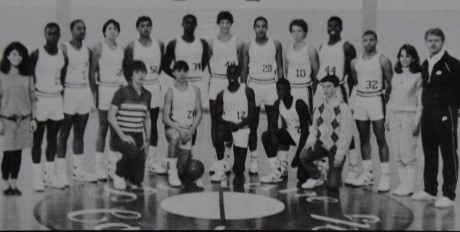 Richard Cowles is the tallest in the back row of the 1987 Bellaire Cardinals Slammin’ Basketball team. 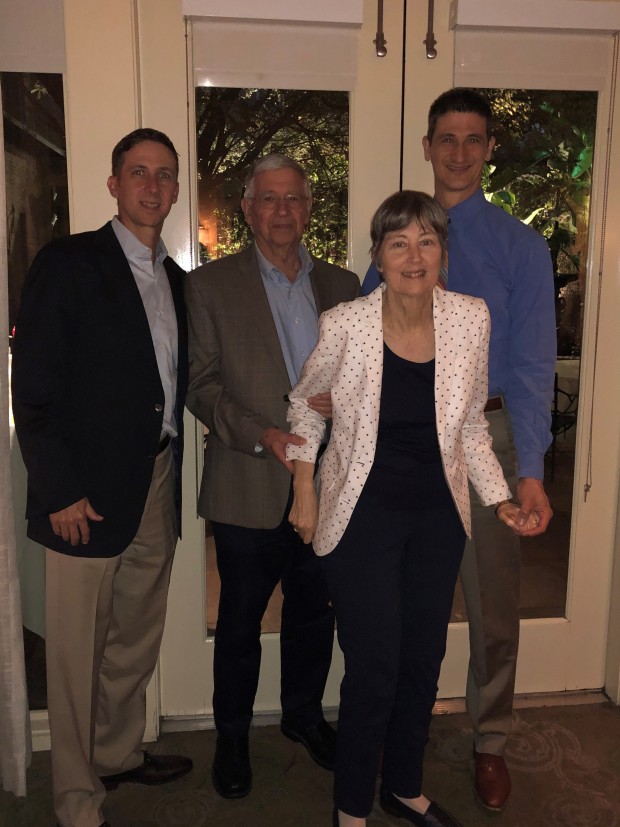 The Cowles family shares a love of basketball, education and family. Joe and Barbara are thankful that Dan and Richard have passed those same loves to their children.