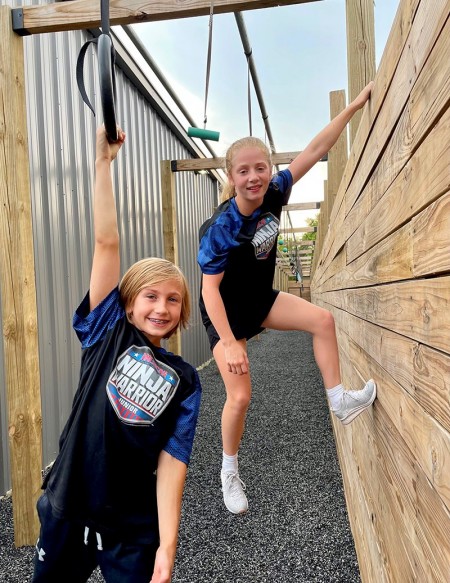 Grace and Levi train together year-round.

Audiences watch in awe as hopefuls take on a series of obstacles, all leading up to the big finish of the Warped Wall and, for a lucky few, the roar of applause as they cross the finish line and hit the buzzer.

“I’ve always wanted to be a Ninja Warrior,” said Grace. “Even after I complete on American Ninja Warrior Junior, I want to compete with the adults [when she's eligible at 15].”

Grace and Levi practice nearly every day at Memorial-area training center RISE at the Warehouse. There, they utilize the warped wall (a massive curved wall competitors have to scale at the end of each course), a parkour bar system, a foam pit, and more. They also work to build their strength and agility.

After submitting a casting video and going through several interviews during the spring of 2021, they were accepted as competitors and headed to Los Angeles for the taping of the show in the summer.

“It was really interesting being at a taping of a show,” said Jennifer Schneider, Grace’s mom. “You never see that side of things when viewing from home.” Seeing the cameras and lights, the announcers, and the (smaller than usual, due to Covid) audience was a thrill. 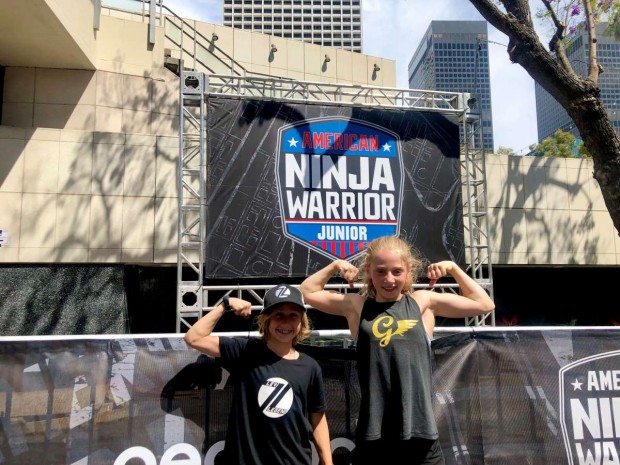 Grace and Levi traveled to LA for the taping of American Ninja Warrior Junior over the summer.

At each step of the competition, parents Jennifer and Ariel Schneider and Ryan and Stephanie Meeks watched and cheered in hopeful anticipation that Grace and Levi would make it to the next round.

“I was super nervous standing on the platform before all my races, and I didn’t know what to expect,” said Grace. “But I had a great time, and I met a lot of new friends.”

In the trailer for season 3 of American Ninja Warrior Junior, Grace and Levi can be seen in the first two shots. They give each other a “fist bump” before they take on the obstacle course.

Levi and Grace are not allowed to reveal how their season ends, but they can tell us that they will appear on Episode 3, which drops today on Peacock. There are already 2 episodes available on Peacock (Grace and Levi do not appear in these episodes, but you can watch to scope out the competition)! Stream season 3, episode 3 on Peacock TV to see Grace and Levi compete side-by-side.