As Alaska goes through you 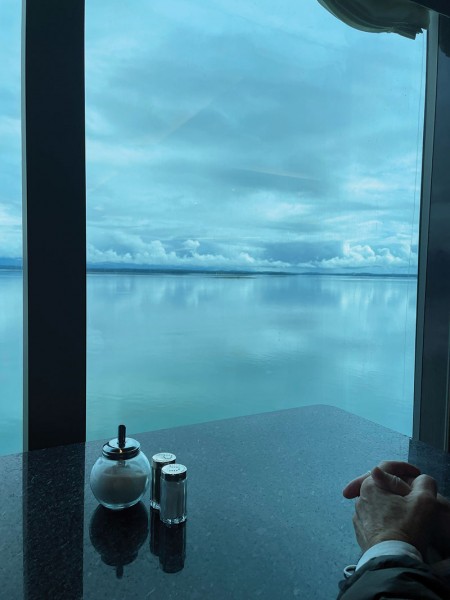 Unmoored, anything but bored, Stan and I tried out the TV in our cabin, a last check-in with so-called reality as our cruise ship left the Seattle harbor, bound for Juneau, Glacier Bay, Ketchikan, and Skagway, Alaska. It’s August 15th. See ya, Houston heat. But first, the news…

U.S. troops have left Afghanistan as heartbreaking images emerge, evoking endless comparisons to the 1975 fall of Vietnam. Wait, I just wrote that story for the September issue. Not about Afghanistan – about one family’s rescue from Vietnam during the fall of Saigon.

I’m not clairvoyant and will be sure to prove it if I take any kind of credit for seeing the future. I just think it’s important to note such things. The cruise is just getting started, and already my sense of linear time has gone overboard.

I wondered if Katherine Le – the Vietnamese-American woman who told us about her family escaping Saigon in last month’s story – was having similar feelings. I texted her from our Alaska-bound ship, which is kind of amazing in and of itself. She too was marveling at the “coincidence” of the publishing timing. The Afghanistan news was already prompting new questions from her American-born friends about her past.

For all I know, you could be wondering what I’m doing on a cruise anyway? All I can say is, it’s the only place we could be around people where everyone on the ship is vaccinated and tested negative for Covid prior to boarding. Hopefully, as I write this in August, our poor hospitals won’t be so slammed by October when it’s published.

Just now, the captain of the cruise ship told us precisely where we were in nautical miles from the coast of Canada, our longitude and latitude points, and the hundreds of nautical miles of sea below us. I’m glad somebody’s navigating. It gives me the luxury to feel the motion of the water, as the wind whistles reminders that I can’t always see what actually exists.

We will soon learn of the indigenous Tlingit Indian clans who say it’s one thing to go through Alaska, but it’s quite another to let Alaska go through you. The Tlingits aren’t big watch wearers. They, like many ancient people, think of time as more circular, with past, present, and future existing in a kind of eternal now.

The Tlingits, or People of the Tides, must have noticed that the otters, seagulls, and their sacred life-sustaining salmon, don’t wear watches either. They just dip and glide, taking life as it comes.

While cruising through Glacier Bay National Park, occasionally you hear what sounds like a jet engine about to take off. It is actually a piece of ice cracking and falling into the ocean. It’s called calving, typical of summer, not just global warming.

In 1794, the explorer George Vancouver described the area as a strait filled with more than 4,000 feet of ice. Eighty-five years later, in 1879, the naturalist John Muir traveled by canoe with the help of Tlingit guides through an inlet that was widening as much as a mile a year. Today we are cruising through 65 miles of bay and air described as the freshest on the planet.

We could have watched more news of Afghanistan on the trip, but didn’t. There was too much fresh air to fill our tanks, too much open ocean to wet our souls. I want to recognize my kinship with this wild and improvisational land of ice, rock, forest, bay, otters, whales, and seagulls.

There will be plenty of time back home to cry real tears as this new reality folds into our American story. From Vietnam in 1975 to the United States on September 11, 2001, to Afghanistan in 2021, we carry around images of a world nobody wants.

The author Luis Alberto Urrea has become my latest inspiration. “There is only us. There is no them,” he famously says, as he writes stories of empathy and humanity from both sides of the border. Born in Tijuana, Mexico, to a Mexican father and a white American mother, he recounts scenes of children using a border wall as a volleyball net.

This trip makes me long to search for the gentle answer to the gotcha quip, to get to know the other, only to realize the other is not my enemy. What’s an enemy anyway other than someone to disarm with love?

The Tlingits learned a long time ago – a gun is no match for a grizzly bear. They have a counter-intuitive way of behaving when encountering a grizzly. Many have lived to say this works. They drop their guard and sing to it.