The story of a fierce Rice fan 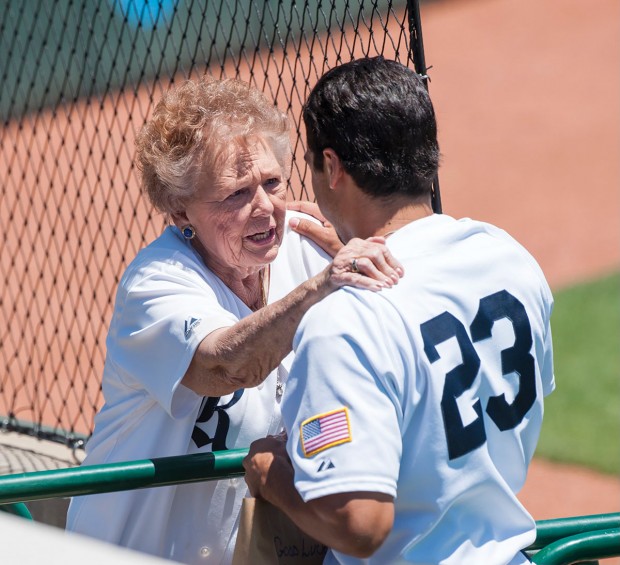 HAVE SOME GUM Joyce Pounds Hardy gives encouragement to Rice star Anthony Rendon, named 2010 college player of the year. Rendon is currently a third baseman for the Los Angeles Angels.

Joyce Pounds Hardy, Rice University super-booster, left this world in 2018 at the age of 92. I’m hoping she’s getting some well-earned rest. In life, she left bubble gum and all on the field. And now, with José Cruz Jr. heading up her beloved Rice baseball team, her family is feeling her smiles.

The Bubble Gum Lady sounds a bit tame for a woman who was threatened with expulsion for unladylike conduct as a Rice student in the early 1940s. Her crime? Organizing a girls’ Powder Puff football game on campus in front of, well, other people. But Joyce stood her ground. The administration caved. The girls could play, but on the outskirts of campus where their unladylike conduct would be more discreet.

Joyce vowed that from then on she would do everything she could to enable women to play sports on campus. But then, another vow sent her on a detour. She met a medical student and Rice alum, Tom Hardy.

Joyce and Tom married after her sophomore year. Joyce followed Tom on his naval tour, then back to Houston for his medical practice. Twenty-five years and five children later, Joyce re-enrolled in Rice to finish her English degree. It was 1967.

By then her youngest, Larry Hardy, was about 10. Larry grew up to follow in his father’s footsteps as an anesthesiologist after he attended Rice and played Owls baseball between 1974 and 1977. This galvanized Joyce into a diehard Owls fan with some creative ideas on how to support her team.

Larry recalls that his mother thought the plain wooden benches at Cameron Field (before Reckling Park) should be painted Rice blue. She took it upon herself to organize volunteers to make it happen in time for the Rice-UT game in 1974. “The story is that the paint wasn’t quite dry on the visitors’ side,” Larry says, “and that some UT fans left with blue paint on their behinds.”

It was about this time that Joyce earned her nickname, The Bubble Gum Lady. Larry says his mom noticed Rice players chewing tobacco in the field. She and her physician-husband Tom felt bubble gum was a healthier alternative. So she decided to bring a big bag to every game, throwing bubble gum out on the field and passing it out between innings.

Fun-loving as she was, it gnawed at Joyce that she was born too early to play varsity sports as a female. But by 1972, a federal law called Title IX required that women be offered as equal an opportunity to play sports as their male counterparts.

Joyce was there to support the first women athletes to arrive at Rice, cheering them on at basketball and volleyball games in the sweltering Autry Court. By 1989, Autry Court had earned the nickname Jungle Gym. Apparently, a Dallas sportswriter came up with the term, intent on making a dig at Houston.

Joyce brought up the need to air-condition the gym to the Rice Board of Governors. The response was predictable. “Okay, Joyce, why don’t you just head that up.” By 1991, Autry Court was air-conditioned, thanks to a fundraising drive led by Joyce.

In 1992, Joyce served on a select committee that named the now-legendary Wayne Graham as the Owls’ baseball coach, a decision that would put Rice on the map in college baseball. Graham’s first recruit that year was José Cruz Jr., giving Rice a huge boost in prestige by nabbing such a highly desired player who turned down top-tier schools for the lesser-known Rice.

Somewhere mixed in all of this, Joyce, the English major, wrote several books, including some poetry, on a variety of subjects completely unrelated to Rice sports. Her book Roads to Forgotten Texas was featured on Ron Stone’s “The Eyes of Texas.” Her son Larry’s favorite is Surviving Aunt Ruth, the story of how Joyce dropped everything and flew across the country to take care of her aging aunt.

Larry says he’s sure that Lance Berkman’s bubble gum-blowing habits, exhibited later in his spectacular Major League career, are part of his mom’s legacy from his days at Rice.

“You could see him (Berkman) putting a whole wad of chewing gum into his mouth before batting,” said Larry.  “I remember him blowing a bubble with the ball coming at him. Every time I saw that, I thought, ‘That's my mom’s influence.’”

Since 1975, the school’s highest honor in women’s sports, the Joyce Pounds Hardy Award, goes to the Rice senior who best represents well-rounded excellence in sports, academics, and community involvement. That’s quite a legacy for a woman called “The Bubble Gum Lady.”

Editor’s note: For more on the 2022 Rice baseball team, including head coach José Cruz Jr. and the many players from Buzz neighborhoods, see “From Little League to Rice.”