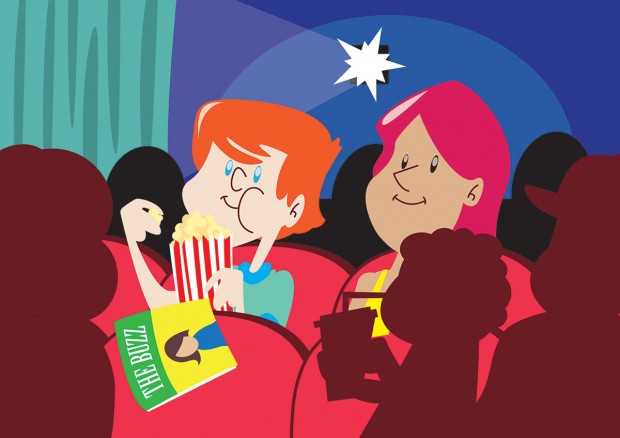 THE BIG SCREEN Summer movies never lose their cool. What are your favorites? (Illustration: behance.net/runamokstudios)

It was as awesome as a Hollywood premiere. My daughter and I, just an hour after bringing her home from her freshman year of college, saw ABBA: The Movie, a mockumentary from 1977. We watched it on a big screen as we ate popcorn and drank cold Diet Cokes. When the audience started dancing in the aisles, I looked at my daughter and said I didn’t think I could possibly be happier. (She rolled her eyes but I’m pretty sure she was happy, too.)

After a two-year hiatus of watching movies at home with our nearest and dearest, many of us are slowly making our way back into theaters. One of the things I missed most during the past two years was a cold, dark movie theater and popcorn and Diet Coke. As if that wasn’t enough, there are finally movies in the theaters. Between this summer’s Downton Abbey: A New Era and Top Gun: Maverick, the big screens are calling.

All of this has me – and our editor Joni Hoffman – feeling kind of nostalgic. She says her favorite summer movie memory is Smokey and the Bandit. “It was the summer of ’77. My buddies Randy and Tommy Uzick had just bought the exact Trans Am that’s featured in the movie. I didn’t realize it, but Randy snuck out before the movie ended,” she remembers. “We walked out of the sold-out theater at Meyerland General Cinema and Randy was parked right in front with his shiny Trans Am, grinning just like Burt Reynolds.”

The Buzz’s editorial assistant Caroline Siegfried has different memories. “Aquamarine, 2006,” she says. “It had everything: mermaids, cute lifeguards on the beach, dumb flirting advice from teen magazines, revenge on mean girls. It’s a sweet movie about the bittersweet feeling of summer-slash-childhood ending.”

Separately, I asked both my daughters, who immediately blurted out the same answer: High School Musical 2. I have to agree, although for me, the movie is secondary to the memory. Some of my favorite moments happened watching my girls and their friends sing along with Gabrielle and Troy as they navigated high school graduation, summer jobs, and moving on – things my still-little girls could only vicariously swoon about.

My older daughter added to the list: “Camp Rock, both 1 and 2, but specifically 1. Also Dirty Dancing and 50 First Dates are good summer movies. Oh, and Endless Summer, because, well, it’s called Endless Summer and it’s about surfing.”

There must be something to summer musicals. Kathrine Kiersted, a rising sophomore at Wake Forest University and a Buzz summer intern, says she loves Mamma Mia. “I love how the music is incorporated, and the whole thing feels like so much fun,” she says. “Growing up, I used to listen to ABBA and watch Mamma Mia all the time with my mom!”

Several people cited Grease – yet another musical! – as their favorite film. Brooke Halverson, who has three sons (William is a star in many of Houston Christian High School’s theater productions), describes Grease as, “Happy. Music. Dancing.”

My dad puts Grease at the top of his list as well, but even higher for him is the original Top Gun. He’s been known to turn on surround sound and push the volume as high as it will go as he watches the fighter plane scenes.

Bull Durham tops Houstonian/Coloradian Heather Kearney’s favorites not only for the movie itself, but also as a reminder of an exciting chance meeting. “It came out the summer after my sophomore year in college [at UT],” Heather says. “I was living in Connecticut, and I went to the movies in Westport. Everyone was standing in line waiting to go in with their tickets and there was a lot of whispering. I turned around and saw Paul Newman and his wife Joanne Woodward standing in the line behind me waiting for the movie. They lived in Westport. They were very nice and spoke to everyone – just a couple going to the movies on a Saturday night.”

As for the movie? “It was great, just one of the best,” Heather says. “My stepmother’s dad was a major league baseball scout in the Carolinas, so I had heard a lot of stories growing up about minor league baseball, and it was extra-fun to see a lot of that in a super funny movie. And I admit to a raging crush on Kevin Costner after seeing it!”

When temperatures top 90 degrees and you (hopefully) have a little more time on your hands this summer, what movies will you be sinking into? Let us know – comment under this story or email [email protected].