Part one of a two-part saga 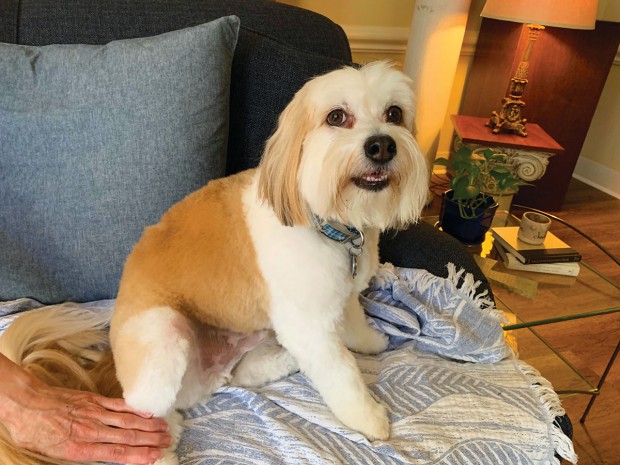 Five Septembers ago, just before meeting Stan-the-Man, I was in a relationship with a younger guy with more hair. We met in September of 2017, about a month after Harvey floods nearly drowned us all. It wasn’t exactly love at first sight. All I could see was a panting pink tongue dangling through a disheveled mass of mud and fur. It was all my petite next-door neighbor Donna Drennen could do to hold him standing on my driveway.

“I can’t keep him. I have a houseful of cats,” she rightly said. Donna basically runs a Senior Living Community for cats from back when she took it upon herself to collect the feral cats in the neighborhood and had them spayed or neutered. Those she couldn’t place remain with her to this day. Her niece Joanna Drennen has the same admittedly admirable “condition” only involving dogs.

Earlier that day, Joanna fished this shivering mass of fur out from under a car near her Meyerland home. She suspected he was a rare, expensive breed. Her first stop was to the vet, to see if he was microchipped.

No chip, no collar, no tags, and unneutered. But the vet did confirm that he was indeed a Coton de Tuléar, known as the Royal Dog of Madagascar, an island republic off the coast of East Africa. These small fluffy dogs, known for being affectionate and intelligent, usually cost an average of $3,000.

Joanna’s dog-inn was full, plus I suspect, her home was reserved for those not so easily placeable. I felt honored to host His Royal Highness his first night inside in perhaps a month. “He acts like he’s never seen a leash,” Donna said, handing him to me.

“One step at a time,” I thought. His feet didn’t touch the ground until they were in the bathtub. Here he passively submitted to a long-overdue bath. Then, he let me plop his wet torso on a towel, in my lap for a clump-by-clump scissor cut, letting me move his legs back and forth, looking like an old man relaxing through his spa treatment.

Finally, he and Annie, the Yorkie-Poo, met on the floor, two blondes of the opposite sex, about the same height, noses touching, tails wagging; I had a feeling this was going to be more than a one-night stand.

For some reason, the name Henry popped into my head. He fanned out on the floor spread-eagle, with Annie politely curled nearby. It was an almost-human position, or maybe that of a double-jointed dog, with front and back legs splayed to each side. Henry had gone from frumpy to beautiful, but exhausted. I wondered what his life had been like for the past month.

Nobody claimed him, from pictures Joanna posted on Nextdoor, but somebody had seen him with another dog like him, only with grey markings. The two were crossing S. Braeswood when the other dog was clipped by a car. Joanna searched for his grey companion, most likely a littermate, to no avail. Perhaps they belonged to a breeder.

My daughter Laura took it upon herself to employ her social media skills to do a thorough online search. There were plenty of takers, but no actual owner.

To put it mildly, Henry started feeling more and more comfortable by the day. He acted as if he had never lived inside a house, jumping from the sofa to the coffee table to the dining table and barking at that dog in the mirror, running to find him on the other side. And, as Donna warned, walking him on a leash was like having a hyena on a bungee cord.

I tried to leave him unneutered in case the real owner showed up. But by month two, I gave in, hoping he would calm down. He didn’t, but it made it easier to try the dog park. Henry was by far the fastest runner, from end to end. Then he would skid into his turn like a racecar, leaving a cloud of dust.

About three months into this relationship, I met Stan-the-(Hu)Man. It was my first date since my husband, George, died in 2013. Stan had two mixed-breed waist-high dogs. We would meet up with all four dogs most Saturdays at the dog park to see how everybody got along.

“I like the name Henry,” Stan said. “My father’s name was Henry.” But what he didn’t say that we both knew, was we can’t have four dogs between us. Each week, Henry caught someone’s eye who wanted to know more about him. There were many offers to take him. I couldn’t give up my little buddy to just anybody. “One step at a time,” I thought.

Next month: How Henry finds his forever home.