Forks on the Left

Knives and spoons on the right – Not a Memoir, Part 3 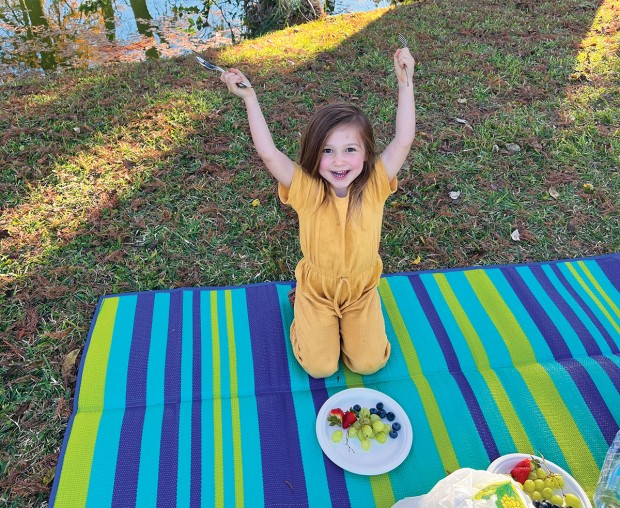 PRESCHOOL PERSPECTIVES Four-year-olds see more than we think. Pictured: Stan-the-Man’s four-year-old granddaughter, Arden Evans, demonstrating “forks on the left, knives and spoons on the right” at a picnic on the Guadalupe River in Hunt, Texas.

It wasn’t a typical morning. I must have been no more than four years old, standing in the yard, holding my mother’s hand, while Dad started the car. It did not explode, so we got inside. I had no way of comprehending that Dad was taking on local organized crime in his own 26-year-old way, resulting in threats on his life.

From there, I assume we resumed our normal day. I would be delivered into the care of Mamie, my great-grandmother, so Mama and Daddy could go to the family-owned newspaper, The Fort Bend Reporter.  “I want to go to work with you!” I screamed inside my head, where I did most of my talking.

If allowing your kids to get bored is a good thing, I’m the poster child. Mamie, the one always home, winced when she walked. Her confinement was my confinement, inside a small white A-frame house she shared with Ikey, my great-grandfather and Aunt Jessie, Mamie’s sister, who both worked at the newspaper.

I couldn’t go into the yard. But I could go into her bedroom to fetch things, like her big round magnifying glass for reading the newspaper, then her Bible. Mamie just seemed to be making it through the day, bracing herself on furniture that barely fit into the house, as if it had once been in a larger place.

I knew there was a world out there, where my parents were, where Mamie’s furniture once was, beyond the sound of the train whistle. I also knew there were other children like me, but I didn’t know any. I didn’t find out until first grade that I was one of the few who didn’t attend something called kindergarten. It cost money, so I didn’t go.

But sometimes things would actually come to me, like the Sears Roebuck Catalog, sent to every house in town, at the end of August. I was handed Mamie’s catalog and a pair of scissors and told to cut out the people for paper dolls. It was like putting a world into my lap. I got to cut out adults who got to do anything they wanted.

While I was deep in paper doll world, every day at noon, the fire station siren let us know that it was time for lunch, or dinner as it was called at Mamie’s house, an actual event. Every morning around 10, Joyce, the family cook, would slip in the back screen door and start the noon meal for the day. It was a varied feast of some roasted, fried, or baked main dish with plenty of vegetables, potatoes, and biscuits. Nothing came from a box.

Joyce looked pretty in her white uniform, with an apron that showed off her small waist. Her tall dark silhouette was topped by a French twist, though I doubt she called it that. Only her white nurse-looking shoes looked scuffed and worn down. Joyce walked everywhere she went. Actually, so did Ikey. He never learned to drive. Rosenberg was a right-sized town for that.

That noon siren was my signal to set the table with the sterling silver from the box next to the long dining table that barely fit inside the kitchen. To this day, I cannot automatically tell my left from my right. I need to look at a ring on my hand, to prompt me. Joyce put the napkins on the left so I would know where to put the forks, then the knives and spoons on the other side. There were six settings, for me, Mamie, Ikey, Aunt Jessie, my mom and dad.

I, of course, was most excited to see my mom, though she kept her game face on so I wouldn’t cling and beg to go with her. It was Aunt Jessie who really saw me.

For the most part, the conversation wasn’t meant for me, unless I was told to eat a vegetable or to stop putting a half-inch of sugar in my tea. I didn’t mind.

It gave me time to notice Joyce slipping a plate of food through the back screen door, when her husband Jake, arrived with a smile. “Come on in, Jake,” my father would say. Even at four, I realized Jake would refuse. He stayed on those back doorsteps, sopping up every last bit with his biscuit. Joyce ate near us, at a new invention called a TV tray, ready to jump up for anyone who wanted more.

Like Mamie and her bad foot, Joyce and Jake were getting through the day in their own way. People kept their places, like forks on the left, knives and spoons on the right. Four-year-olds see more than you think.