Class of 2017: Their Funniest Moments 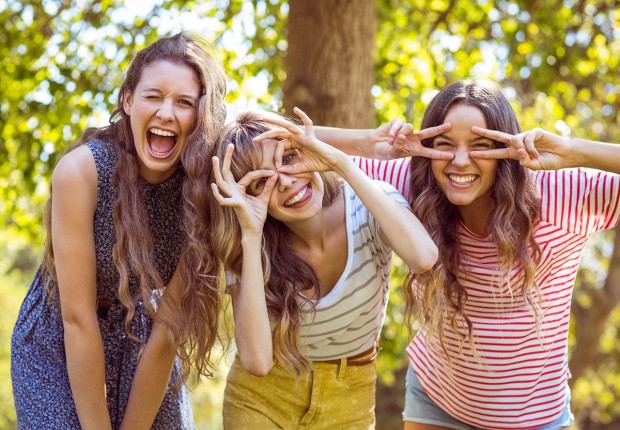 The Class of 2017 shares their funniest memories from high school.

We all know that high school can be stressful – academically, socially, emotionally, for a multitude of reasons. There’s pressure to excel in school, extracurricular activities, and to still make the time to grow and maintain friendships.

As part of our annual “Where are they headed?” story, we asked the Class of 2017 to look back on their high school careers and share their funniest memories. Some of these might be considered “you-had-to-be-there” moments but they’re all reminders of those irreplaceable high school memories. Here’s what they shared:

Kate Balleza (St. Agnes Academy): “Every day at lunch with my friends!”

Alyssa Barrett (St. John’s School): “During a grade-wide biology lecture my freshmen year it was completely silent while everyone was taking notes. I hit my space bar and it made the loudest sound I have ever heard a space bar make. Everyone turned to look what the sound was, and my friend and I just burst out laughing and everyone else quickly joined in.”

Evelyn Clark (Incarnate Word Academy): “My date and I had an epic fail with the map app on my phone. We drove the wrong direction to a dance and ended up being an hour late! It is funny now but was not funny at the time.”

Benjamin Cohen (The Emery/Weiner School): “During my 10th grade trip to San Francisco, it was April Fool’s Day but no one realized it so our teachers decided to play a joke on us and make my entire grade think that we were in trouble and think that we had lost our free time. The teachers got really serious and everyone got really scared that we had lost our free time and were actually in trouble, but soon enough, we caught on that it was an April Fool’s joke.”

Rylie Cohen (The Emery/Weiner School): “Being in New York with my best friend.”

Catherine Craft (St. Thomas’ Episcopal School): “There are too many to list.”

Greyson Crosswell (The Tenney School): “I always had the most fun times playing golf with friends after school. Many funny stories!”

Paula DeAnda (Carnegie Vanguard High School): “The funniest moment from high school was our senior prank. We brought farm animals and let them roam around the courtyard of our school one morning.”

Abdullah Dowaihy (Alexander-Smith Academy): “When I accidentally drew on the board with an extra super permanent industrial sharpie and we spent a lot of time trying to remove them.”

Madeleine Flanders (Houston Christian High School): “When I think about that day, I still laugh until tears pour from my eyes. We were in Language Arts, deeply immersed in a student's presentation at the Promethian board, when he suddenly dropped the Promethian pen and it rolled under the radiator. He proceeded to pull the radiator away from the wall in an attempt to retrieve the pen. With a look of sheer fright, the teacher shouted, ‘Nooooo!’ It was too late and the scene quickly unfolded. The water line to the radiator broke and water started gushing at many gallons per second across the floor. Soon the classroom filled, the water flooded the hallways and then all the other classrooms. The only escape was the staircase and it had become a rushing, roaring Niagara Falls. All the lights and computers started to pop loudly and go black. Teachers began barking out orders for all kids to escape the great flood via the staircase. The entire building flooded, but we all made it out safely. Once the emergency was over, our class often recounted the events of that day, especially surfing down that dark stairwell illuminated only by a red exit sign. This memory still sends me into uncontrollable laughter.”

Anna Glickman (The Kinkaid School): “While dancing, my friend knocked over a chair, which I proceeded to trip over on stage during a Kinkaid Dance Company performance.”

Coral Goldstein (Bellaire High School): “Any moment spent with my best friend, Caleigh, would have to go down as some of my funniest moments. We are just two goofballs who love cracking jokes and having fun.”

Bailey Hayes (St. Agnes Academy): “I think that the funniest, and scariest, part of my high school career thus far would have to be learning how to drive with one of my very close friends, Victoria Mota. I think that we both questioned whether we were going to survive those weeks multiple times, literally, but it was where I met such an amazing friend and I think that the entire summer of 2014 held a lot of my very favorite memories from high school.”

Abigail Hepburn (Houston Christian High School): “When I got stopped speeding, and I told the officer that my car didn't go that fast.”

Brittany Hitt (Bellaire High School): “I was sitting in the auditorium one day at lunch in tenth grade. There were a few people on stage, and all of a sudden, one girl fell off the stage. It was about a four-foot drop from the stage to the ground. She was obviously okay, and ended up being my best friend for about two years.”

Angela Liu (Bellaire High School): “My junior year, I was selling books to Bellaire parents over the phone on call night for yearbook. Unfortunately, I was in a rush to get somewhere while on the phone and didn't realize that I ended up calling an old number by habit. It wasn't until 30 seconds into the phone call that I realized it was actually my mom on the other end of the line, pretending to be a random parent who was interested in buying a yearbook. Really embarrassing but definitely a moment I'll always remember.”

Ashlon Lusk (Bellaire High School): “My funniest moment from high school was when my newspaper teacher was trying to show us an inspirational video, but it was a video of two horses becoming friends. We all thought she had shown us the wrong video, but she really thought she was inspiring us to be friends with everyone in the classroom. It made the whole class bond more than she thought it would.”

William Mason (Bellaire High School): “The funniest moment from high school happened freshman year, when I pranked the substitute teacher and convinced him that we were the last period of the day and had to move all of the furniture out into the hallway for the janitors. The class played along. I got in a lot of trouble for that one.”

Meagan McAuliffe (Bellaire High School): “My funniest memory in high school would be from the Woodlands soccer tournament when me and a few of my teammates accidentally got in the wrong car and as soon as we realized that it wasn't the right car, we rushed out of it and laughed about it for like 7 minutes.”

Eli Melendrez (St. Thomas’ Episcopal School): “Asking my girlfriend to prom with a sign that said ‘let's taco bout prom’ and then having her taco 12-pack from Taco Bell.”

Ella Morgan (The Kinkaid School): “Every minute of Austin City Limits 2016. Funniest weekend of my life so far.”

Fernanda Nunes (The Village School): “When Houston weather abruptly changed from sunny to an extreme thunderstorm and my friend yelled "The rain is coming!" as all high schoolers sprinted inside to escape the rain . . . it really looked like an action movie scene.”

Louis Oviedo II (St. Pius X High School): “I think playing ‘Blind Dodge Ball’ during my senior retreat was the funniest time of my high school career. Everyone looked so funny falling and flopping around trying to eliminate the other players.”

Kiarah Parrales (Incarnate Word Academy): “One of the funniest moments from high school is when one of our teachers left her laptop charging for too long and it exploded so we all had to gather in the auditorium and leave school early.”

Isis Pinon (Bellaire High School): “Bellaire High School puts on a pageant for the senior boys called Mr. Bellaire where they sarcastically go through the same steps as a real pageant. I never laughed so hard in my life! Some of the dances and costumes they had on were hilarious!”

Paige Robbins (Bellaire High School): “By far my funniest high school memory was an evening that involved tons of high school friends, an open muddy field, and helicopter lights. I have so many wonderful friends from high school and we have made too many memories to mention, most of which I will look back and laugh.”

Ginger Sanchez (Bellaire High School): “In sophomore year, during Russian class, several friends and I were so exhausted that we started laughing over a small, stupid joke. We laughed nonstop, barely breathing and crying all over the place for several minutes for no reason. It was one of those ‘in the moment’ times, and it always makes me appreciate the little things like that that make me so happy.”

Ben Schwierking (Bellaire High School): “Once, in 10th grade, the streets flooded and school was cancelled, so my brother and I tied a wakeboard to a bike and we took turns riding the wakeboard through the water.”

Alexa Spolane (The Emery/Weiner School): “Wearing a huge blow-up inflatable suit to school for Purim day and winning an award for best costume.”

Mary Kate Theroux (Incarnate Word Academy): “My funniest moment from high school was when, on my last day of classes at my school in New Jersey (Villa Victoria Academy), I walked into my Theology class a few minutes late expecting nothing more than a boring day of notes, to a full-blown surprise party. I was gifted pictures, inside jokes (mostly about me moving to Texas), and a jar of pickles. How surprised I was and how great and hilarious that going away party was, really make this one of my funniest and most memorable memories.”

Clarise Trinh (Bellaire High School): “There's too many to just choose one, but my Physics C class never fails to make me laugh. The opportunities to make bad puns are endless.”

Calvin Wong (St. Thomas’ Episcopal School): “Looking back, when two of my bandmates and I got stuck on the side of a mountain in Scotland. We stayed at the peak too long taking selfies and then fog rolled in. We got lost, and had no phone service. It started raining, and I fell four times in the mud. It was terrifying then, but hilarious now.”

Be sure to read more about the Class of 2017 in our annual Where are they headed story and read about some of the teachers that inspired them along the way. Have a funny or favorite memory to share, too? Comment below.