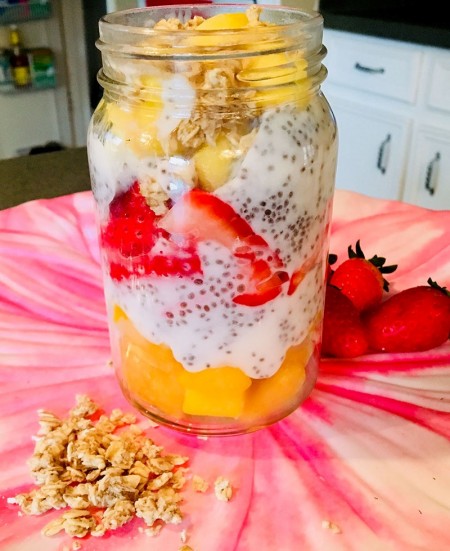 Karina Arnold is a junior at the University of Oklahoma who’s passionate about healthy cooking. She provides creative, healthy recipes and tips on clean eating.

Corrine could down a pudding cup. We called her pudding monster as a parody to cookie monster. During elementary lunch, us second-graders would gather around Corrine and watch her shot-gun chocolate pudding cup after chocolate pudding cup. She was unstoppable. We would ask our parents to pack us pudding just so we could give it to Corrine at lunch. She never went vanilla and her record was six in a row. The most amazing part was after she whipped-off her chocolate smile, she shot up and played at recess, without any stomach trouble. This spectacle lasted until fourth grade. She changed schools, but her legacy has resonated with me.

I hated pudding because I never understood if it was a Jell-O, cream or frosting. As a kid, I rejected any pudding advances, but now I am a pudding proponent, specifically, chia seed pudding.

Chia seed pudding is the dairy-free and added-sugar free alternative to regular pudding. Packed with protein, omega-3 and fiber, chia seeds are the perfect additive to granola, salad, soup, smoothies and now pudding! Similar to overnight oats, chia seed pudding requires no cooking and similar ingredients. Chia seeds are “cooked” or activated through absorption. Raw chia are seeds that have not come in contact with a liquid prior to consumption. Activated chia is when you soak them prior to eating or drinking. You can soak chia seeds in coconut water or in this case, a nut milk to make a pudding. The seeds soak the liquid like a sponge, creating a close-textured and jelly-like pudding.

You can make a quick breakfast for four with this Tropical Chia Seed Pudding or prep the leftovers to make a week’s worth of breakfasts. You can add or exchanging fruits to your liking while using the base pudding. Layering with sliced grapefruit, chopped bananas or frozen blueberries adds variety and compliments the coconut-y base. You can also add this pudding as a mix-in to oats or parfaits like Abby Cowan’s Pomegranate Parfait.  Note: In addition to their nutritional benefits, this chia seed pudding has the tendency to get caught in teeth…pack floss!

If you are like my entire family and detest coconut, you can exchange the base milk with almond, cashew or pistachio. Furthermore, try different yogurts like protein-packed Greek yogurt or creamy goat-milk yogurt rather than a coconut yogurt. Whatever the yogurt you choose, stick to plan flavors. Fruit, vanilla and chocolate flavored yogurts have significantly more sugars and chemicals than plain. If you want flavor, add it yourself with vanilla extract, frozen berries or cocoa powder. By adding your own flavors, you control the amount, taste and nutrition in your pudding.

Unlike the generic store-bought puddings, chia seed puddings are refreshing, filling and good for you. Pudding was and still is a lunch-box classic. How do you like to dress up your pudding? Comment below!