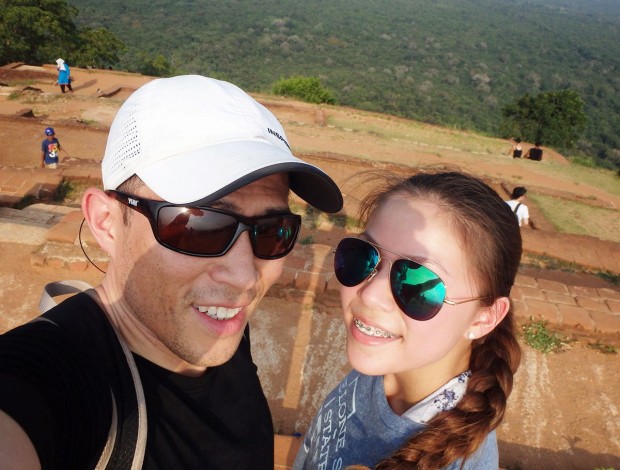 Alan and Sydney Ying, who won the 2017 World's Greatest Travelers title in the Global Scavenger Hunt. Sydney was 14. This year her younger sister Emory turns 14, and Dad and daughter are gearing up for Emory's turn. This 2017 photo of Alan and Sydney's epic journey is taken in Sigiriya, an ancient city in Sri Lanka built atop a massive, flat-topped column of stone.

Our informal travel survey this new year confirmed what we’ve always known: Buzz readers are a highly mobile population, with trips planned to virtually every continent on the planet – Antarctica included. Favorite destinations continue to be Europe and Mexico, with Italy topping the list this year in terms of numbers of travelers; Germany, Croatia, the Netherlands, England, Greece and France are not far behind, with several planning to observe the 75th anniversary of D-Day with a tour of Normandy. African safaris are planned, as well as trips to Southeast Asia and Japan, and the Middle East will not be overlooked.

Stateside, travelers seem to be headed more West than East, with Colorado topping the list. There are trips to California, Oregon, Idaho, Nevada and Alaska in the works. But Washington, D.C., Florida, New Orleans and Nashville continue to have their fans, as well.

Girlfriend getaways are a continuing theme, and family travel includes some serious adventurers. And as always, we have travelers whose hearts are set on doing good.

Gisselle and Eduardo Matta, for example, have an eclectic travel year planned. Eduardo and a team of fellow radiologists from UT Physicians are going to Morocco in April as part of Rad-Aid, an international aid organization focused on increasing and improving radiology for poor and developing countries. Gisselle is staying put for a 50k trail race in Huntsville – that’s right, 5-0, as in ultra-marathon – her first. But later she will enjoy a well-deserved vacation, taking a western Caribbean cruise out of Galveston with a couple of friends. Their big family trip will include a cruise visiting the Greek islands, then Athens and nearby locations; then they’ll spend a few days in Croatia, then spend a week navigating the area on a classic Turkish-style wooden yacht called a gullet. “We are planning on bringing the good camera!” she added.

Alan Ying, who together with daughter Sydney nailed the 2017 “World’s Greatest Travelers” championship in the epic Global Scavenger Hunt, is going for a second round with his second daughter, Emory, now a freshman at Post Oak School and the same age Sydney was at the time of their father-daughter race around the world. 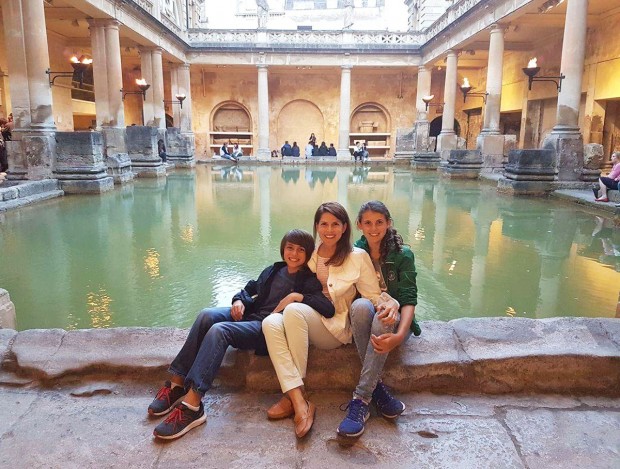 Bennett, Michelle and Olivia Sacks, from left, in Bath, England, on their 2016 European backpacking adventure.

Other adventurous parents include Michelle Sacks and Brooke Braud. Michelle has been taking her kids on summer road trips since 2010, when Olivia was 7 and Bennett was 4. In 2016 the trio took their first backpacking trip across Europe, beginning in Ireland and the UK and taking trains, buses and the tunnel under the English Channel to France, then on down to Spain. This year they will fly into Italy on and then will travel to Croatia, Budapest, Austria and fly home from Germany.

Brooke’s adventure will just be flying London, where her parents moved a year ago, so the kids can see their grandparents – but traveling alone with 2-year-old Mackenzie in tow and 11-month-old Maddie in arms will be adventure enough.

At the other end of the age spectrum, Virginia Mampre and Gayle Christie are testing the limits of on-the-road filial bonding, planning trips with nonagenarian parents. Virginia is planning an 11-day trip with her father, 96-year-old Albert L. Mampre, one of the original Band of Brothers as in the HBO series, and the last surviving medic – indeed, former head of medics –  from the 101St Airborne Division, otherwise known as the “Screaming Eagles.” Albert will turn 97 right before the trip. Albert celebrated the 70th anniversary on June 6, 2014, an event that attracted 6 million visitors from all over the world, seated onstage with the U.S and French presidents; Virginia was in the front row.

Gayle Christie will be taking 99-year-old mother, Ruth Peters, to Dubai in April to visit the Dubai Miracle Garden…. the world’s largest flower garden. From there they will cruise from Dubai through the Suez Canal, with several stops including Israel. Then it’s on to Athens and a week in Italy, ending with a Vivaldi concert in Venice.

Rachel Fisher’s family will converge closer to home in Disney World, where they have started a tradition of attending the park’s festivals, including the Epcot Festival of the Arts in February and the International Food and Wine Festival in the fall. “The truth is, my family and I are Disney fanatics, so the festivals themselves aren't the main reasons we go (that'd be the rides and overall magic of Disney),” Rachel wrote. “BUT, the festivals do keep us coming back multiple times a year. They allow for new experiences and exciting opportunities outside of a typical Disney trip. Plus, as adults it's wonderful to have programming specifically catered to us (aka, lots of wine flowing)!”

For a bit more extreme cruise experience, two couples are heading to Antarctica. Stephen and Joyce Fadem began their year with a National Geographic Expedition to the bottom of the world, with an extension in the Easter Islands. Ron and Patty Woods will be exploring the White Continent with the UT Flying Longhorns aboard the L'Austral.

Cary Robinson is dedicating his travels this year to four-footed friends – ones he’s already helped, and others that he hopes to. He’s planning to go to Wisconsin to visit every single rescue dog (and their humans) that he has rescued and sent from Houston – a reunion of sorts. The rescue groups he works with– Rescued Pets Movement, Hoping Fur a Home, Sonoma’s Haven and Albert’s Dog Lounge, which only takes old-timers – send dogs up north to Colorado and Wisconsin because they have no stray population due to freezing temperatures. “Sadly, we have a huge stray population in Houston. So we save and vet them, and send them up north where they are loved and needed. I'm told that adoption events at Petsmart are like Black Friday sales in Houston where everyone rushes in for that one price-reduced TV.” (See our Jan. 2019 story Must Love Dogs: Neighbors who foster pups for more on Buzz residents who foster dogs, plus a list of local groups in need of fosters and volunteers. )

One group alone has saved and transported over 25,000 in just a few short years, said Cary, who has photographed over 7,000 dogs for the shelter and rescue group. “It's a beautiful thing.”

Taking his love for animals further afield, he is trying to put a trip together to go work with elephants in Thailand through the Save Elephant Foundation, a Thai non–profit organization dedicated to providing care and assistance to Thailand’s captive elephant population.

Girls’ getaways continue to be a trend. Some organize trips around special concerts, like Carrie Stallwitz’s trip to Chicago to see the Elton John Farewell Tour with friends. Likewise, Sofia Mafrige is planning a trip to Las Vegas to see George Strait, “traveling with my college sorority sisters who together would see him perform at hole-in-the-wall locations around San Marcos and the Hill Country during our college days in the early 1980s before he hit it big!” Music is a theme for Roseann Rogers and friends as well, who are planning a trip to the Music City itself – Nashville.

Other European adventurers include the Camino de Santiago hikers we wrote about in the past year: Susan Tallman, who is planning to walk the Coast to Coast trail across England this summer, and Bina and Anil Dara, who are going on a “bike and boat tour” to the Tulip Festival in the Keukenhof Gardens of Amsterdam, then to Italy for a culinary tour. Adriana and Steve Rosenbaum are going to Ireland, where they plan to celebrate Adriana’s 67th exploring the manor houses and castles.

And Mexico travelers include Linda Goehrs, who plans to spend the holidays this year in Mexico City and San Miguel Allende, and Susan Tallman, who recently visited Oaxaca.

The stories go on; we wish we could share them all. But this is just a small taste of what we have planned for Buzz stories in the year ahead. If you have a special travel tale to share with our readers, please comment below or drop us a line at [email protected]. See all Travel Buzz stories here.