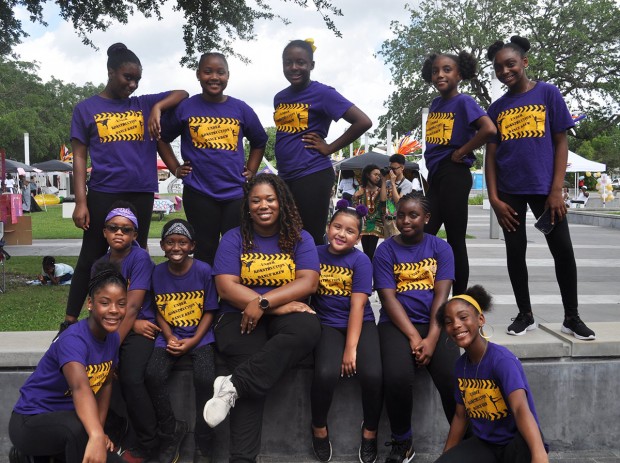 Yesterday, I told Buzz editor Joni Hoffman that I had a realization: I have the best job in the world. This wasn’t mere flattery - it was truly a thought that went through my head on Monday afternoon. I was driving from an interview with a Buzz-area artist who I’m writing about, when I began reflecting on the places my job had taken me just over the previous two days – including the reopening of Holocaust Museum Houston, the home of a fascinating Bellaire neighbor and, what I want to tell you more about here, Emancipation Park.

I visited Emancipation Park on Saturday morning for the annual Juneteenth Celebration. Located in the Third Ward neighborhood, the park was purchased by recently-freed slaves in 1872, for $800. Texas slaves did not learn of their freedom until June 19, 1865 (Juneteenth) and they purchased the park as a place to congregate and to celebrate their freedom. Segregation laws at the time barred African Americans from using public parks, so Emancipation Park, for a number of years, was the only municipal park in Houston African-American people could legally use. Today, the 10-acre space stands as Houston’s oldest park and remains the site for annual Juneteenth celebrations. 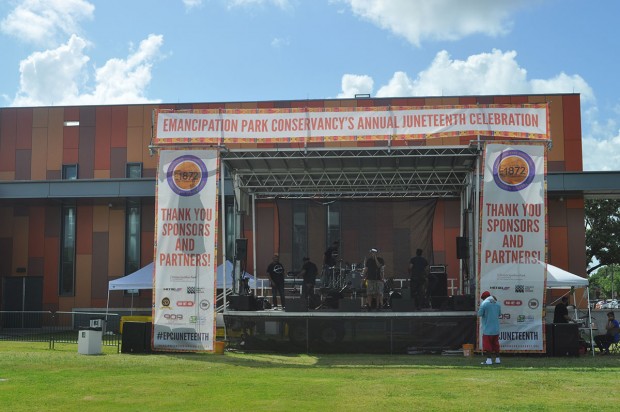 I had just learned about Emancipation Park last month, when I was working on a Buzz story about the Third Ward neighborhood. After writing that story I was eager to return to Third Ward to experience the Juneteenth celebration.

I arrived at the park around 10:30 a.m., the sun already blazing down overhead. The event was scheduled to run all day and celebrations were in full swing when I arrived. A dance group took to the stage to perform an upbeat number to Chris Brown’s “Turn Up the Music,” a stage on the other side of the park featured a live music performance, kids munched on sweet watermelon and the smell of barbecue wafted through the park.

I went to the event alone, and, under other circumstances, I may have felt awkward or out of place. I may have been scared to enter a community that’s not my own. I may have unfairly assumed I’d be unwelcome. And I may have been too timid to ask people what Juneteenth meant to them. But my job as a Buzz writer gave me both the purpose and confidence to approach strangers and hear their stories. In doing so, I gained a new understanding of African-American history, and I learned that my presence was, in fact, welcome. 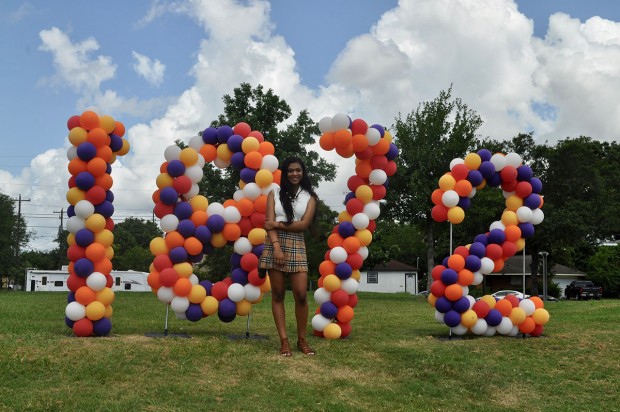 “For us, Juneteenth is really about everybody understanding the history,” said Lucy Bremond, executive director of Emancipation Park Conservancy. “We do that by retelling the story of the park and having other people who are not of color appreciate what it meant for someone to spend $800 in 1872 to purchase this park. We want people to understand the flight of the people and their courage – right out of slavery – to pool their resources.”

Bremond explained to me that Juneteenth celebrations have, in many ways, remained constant over time, even after the park has grown following a $33 million renovation completed in 2017. Celebrations still include a parade, performances by local talent, a beauty pageant and plenty of food. “We try to keep doing the same thing people have been doing for years,” Bremond said. “We gather, we’re having fun, we’re talking about what Juneteenth is all about.” 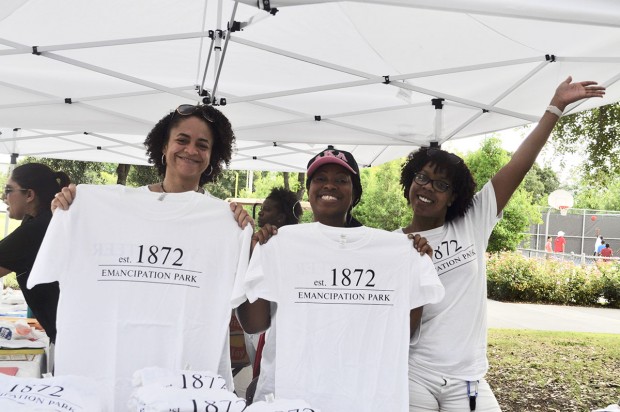 As I continued talking to attendees, I was struck by the diversity in their stories. Some attendees who I met had driven from other neighborhoods – uptown, downtown, even from neighborhoods outside of Houston such as Cypress and Pearland. They came to celebrate Juneteenth and to teach their kids more about the history of Emancipation.

Others grew up in the Third Ward and have been visiting Emancipation Park for their entire lives. Zoe Dillards, who lives within walking distance from the park, said that ever since Emancipation Park underwent renovation, she has loved bringing her stepkids. At the Juneteenth celebration, I found her sitting in a shady spot playing a card game with her stepkids while enjoying the live music.

“Juneteenth is a big thing for us. Even though I’m half Puerto Rican and half Black, it’s still kind of my holiday too,” she said. 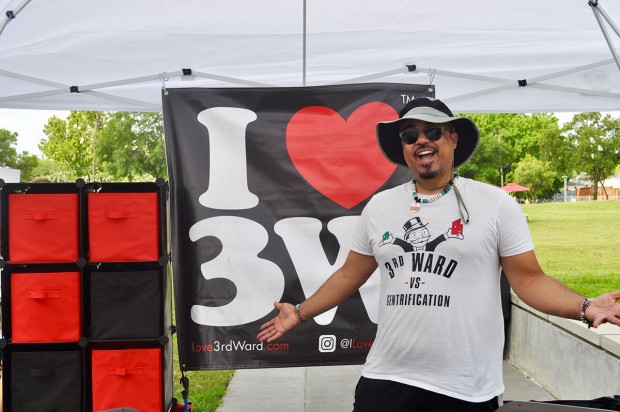 Artist and Third Ward native Marc Furi set up a vendor booth at the park where he showed off his “ILove3rdWard” t-shirts. (Photo: Pooja Salhotra) 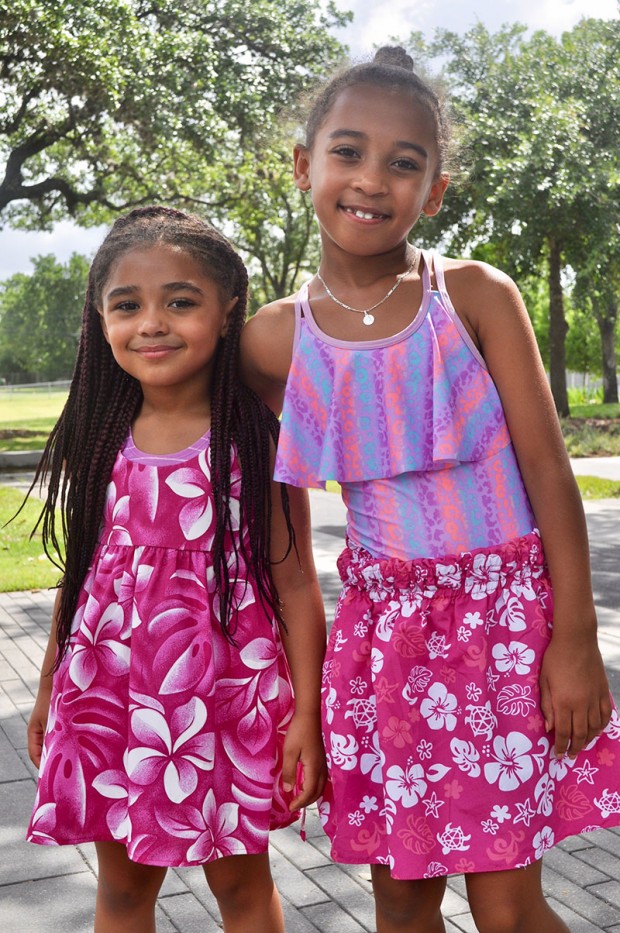 Nylah and Skye Bohannon attended the festival with their mom to learn more about the history of Emancipation in Texas. (Photo: Pooja Salhotra) 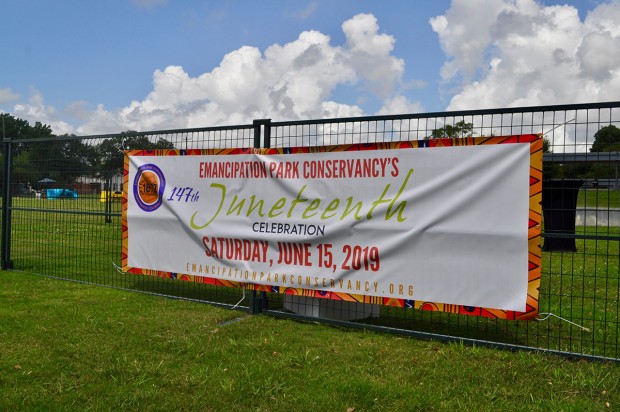 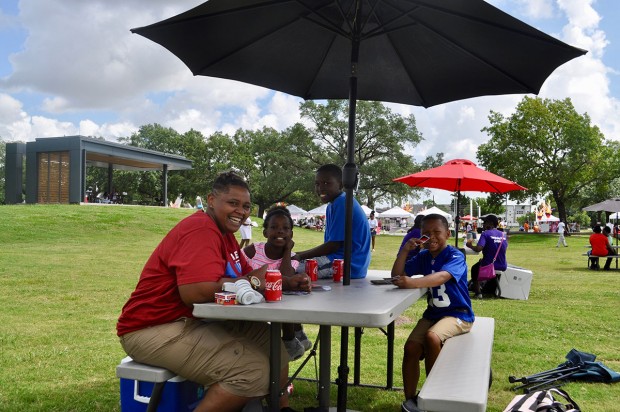