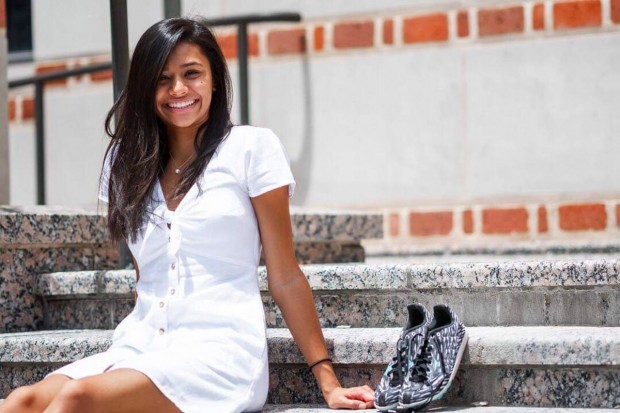 Khayla Patel, 22, poses with her running spikes on Rice’s campus. She is captain of the Rice University Women’s Track and Field and Cross-Country teams. (Photo: Elhadji Diop)

Life might feel especially stressful right now, and we all want to use this time to introduce healthy habits into our schedule. But why does something so beneficial in the long term, you ask, have to feel this painful?

Buzz summer intern Steffi Halow, an 800m and 1500m runner on the Rice University Women’s Track and Field and Cross-Country teams, interviewed teammate Khayla Patel, 22, on this topic. Khayla graduated from Memorial High School in 2016, and is now the captain of the aforementioned teams. Most recently, Khayla led the team to the Conference CUSA Indoor Title, finishing in fourth place in both the 3K and the 5K. During a therapeutic video call, Khayla and Steffi discussed all aspects of running. Keep reading for excerpts from the interview:

Thank you for agreeing to talk with me, Khayla. It’s been such a long time since we’ve trained together on the Rice track team.

I know, it’s so crazy. It feels like forever now.

I wanted to hear from you, especially, since you’re the leader on our team. Plus, you’ve grown up in Houston so you’re so familiar with all the trails, the weather, the running culture here. I wanted to first ask you what you like about running?

I would say my favorite part about running is competing. I get this adrenaline rush while competing. Also being around people that share the same interest as me, my team, is amazing. Running has given me a lot of confidence. Before I ran, I used sports as an outlet because I was a very stressed child and angry, I might say. This was an emotional outlet for me, kind of like therapy; I’d relate it to that.

That’s interesting that you say that running gives you confidence.  I recently told my mom that our team must be low-maintenance, low-drama because we’re all so confident and secure because we do this every day. Running is a guaranteed physical achievement to tack onto your accomplishments of the day.

I’d agree that we have such low drama. I don’t think I’ve had drama on my [track and field and cross-country teams] because the environment of running is so supportive.

What is the best advice you’ve received about running?

I would say Coach Jim Bevan [Rice Track and Field Head Coach] has helped me a lot in that sense, calling me every week during the summer and asking me how I feel. The best advice he gave me was that if I feel just mentally exhausted from runs and the heat, to be okay with taking breaks in the runs. Taking water breaks as well. When I get to the point that I am doing my long runs, I will put water bottles throughout the trail. Just go in my car, drop off water bottles. That’s what I read in Runner’s World, actually. Oh, and coming up with playlists - that’s also really fun.

We were talking about how stressful times can be just by reading the news. And, an interesting tension is that running, in times like these, is supposed to be your constant: something that eases stress and makes you feel good about yourself. Like you said earlier, it builds your confidence. As you mentioned, running can also be very mentally taxing as well as physically, since it’s so hot and humid outside. How has your running schedule changed in light of COVID-19?

The first couple of weeks were pretty difficult. I didn’t want to exercise. I talked to one of my teammates about it and her advice was: take a week off and do other things. Cross train, swim. I tried that and my mental state has been a lot better just talking to people about it and realizing that they also feel the same way. Runner’s envy is a real thing. Going on Instagram and seeing how many miles a friend has run in a day. The settings that people run in, the mountains, the beach, what our teammates in different, more temperate states are up to. You can’t compare yourself to other people here because cooler weather makes a huge difference.

I would have loved to read that message!

I also think that trying to figure out a schedule during these times, for running or not for running, is so important. Running in the mornings - even if you get up at 7 a.m. to beat the heat, it’s still usually so humid. In the morning, especially if, like me, you’re used to running in the mid-afternoon during the winter break and during our Spring season, your muscles are tight and in pain as well. If I’m not stopping because it’s hot, I still find myself taking breaks because my legs are sore.

I used to get up and run 45 to 60 miles a week on my own, while this summer I can barely get 36 miles a week or even six miles in a given day. So, just this past week I came up with my own schedule, set an Excel spreadsheet that has helped me become motivated. I feel like if I see something on my spreadsheet then I’d be more motivated to do it.

Even when you have your schedule figured out, uncontrollable factors get in your way. There’s only a rigid time frame for when you can run because of what’s physically possible. I planned my day around an evening run last Sunday because it said the temperature would drop and it had rained earlier but I wasn’t expecting it to rain again. At 6 p.m., I’m in my running gear, walking out the door and [there was] a torrential downpour.

What is your best advice for beginner runners?

I would say for beginner runners to not get discouraged because running is an acquired sport. Let’s say you want to run and you give yourself a goal and you don’t meet your goal. Don’t beat yourself up about it because the next day you can do it. You just have to be motivated, I’d say. Watching motivational running videos (e.g. "Rise and Shine") help me, just like, going online and looking up “motivational videos.”

Why I am doing this interview is that many people are still afraid to go to gyms because they can be high-transmission areas. People have to pick up running and walking. I remember Coach Bevan telling me when I was first starting to run, to do two minutes on, one minute off, for 30-40 minutes. That was really good advice for me. For those who run for recreation, it should be a part of their lives to the extent that it makes them feel good about themselves, and that means it has to be manageable, realistic, and not unbearably painful. Positive reinforcement is what gets people to continue, and I think that a lot of people aren’t easing into running in a way that motivates them to keep going.

That’s super interesting. Considering that the type of exercise I was used to was on and off, interval-type endurance. Measuring your current abilities - the type of fitness you are used to - against your future running goals might make the process, the slow build-up of mileage, that much more manageable. Starting with something more realistic will really benefit you in the future. Once you get to the winter break, it progressively gets colder and easier to run. Then you can keep going without stopping you feel like you’ve really achieved something.

The winter break is the best. If you can stomach the summer, where running can, at some times, feel like an obligation, or an obstacle to push through. During the winter break, it’s my break in the day. My moment of free time, my time to myself.

Thank you so much, Khayla, for talking with me. As someone still fairly new to running longer distance regularly, I can say that I learned a lot from your experience. I can imagine that the Houston community will as well. I think the big takeaway is that with running, especially now, we can’t be too harsh on ourselves. Can’t wait to run with you next season!

Editor's note: For more on the topic of running in Houston, read Where to Run in Houston and Around the World by Pooja Salhotra.