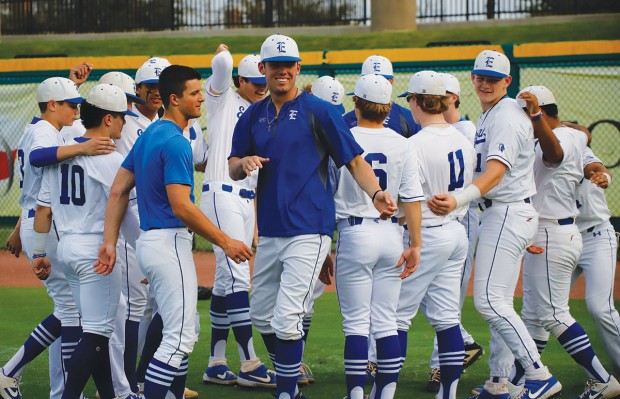 WHAT A KNIGHT Episcopal Knights pitching ace Tanner Witt (blue jacket) was all smiles just before his team’s early-season SPC-showdown victory against rival Kinkaid. Witt fired a one-hitter in what would turn out to be his final game on the mound as a high school pitcher.

When Episcopal Knights pitching ace Tanner Witt fired a one-hitter in an early-season SPC victory over rival Kinkaid, little could he have ever imagined that it would be his final game on the mound as a high school baseball player.

“To go out there and not know that you’re pitching your final high school game with your close friends and teammates is pretty heartbreaking,” said Witt. “We were on a mission this season, and this was going to be our redemption year after losing to Kinkaid in last year’s SPC championship game.”

The Knights’ mission was aborted by circumstances beyond their control with the baseball season ended in the wake of the coronavirus. “It’s just heartbreaking,” said Knights baseball coach Matt Fox. “As a competitor, I’ve been on the baseball field every spring my entire life. You build for the season all-year long, and we had something special with these guys. Between the competitiveness and talent of our team, we were ready to compete for a title.”

Witt, a highly regarded Texas Longhorn signee who is also expected to be picked in the early rounds of the upcoming MLB draft, leaves Episcopal with a pair of SPC baseball championships in his brilliant career with the Knights. “I’m forever grateful for everything I’ve been through at Episcopal,” said Witt. “My experiences put me into the man I am today both on and off the field, including the relationships I’ve made with my teammates and coaches.”

“In my 18 years of coaching, Tanner is probably the most irreplaceable player I’ve ever coached, both from a talent and leadership standpoint,” said Fox. “I’m thankful for him not just as a player, but also as a person. My message to our baseball community is that our relationships do not stop here, so we have a lot to be grateful for despite what’s happened.” 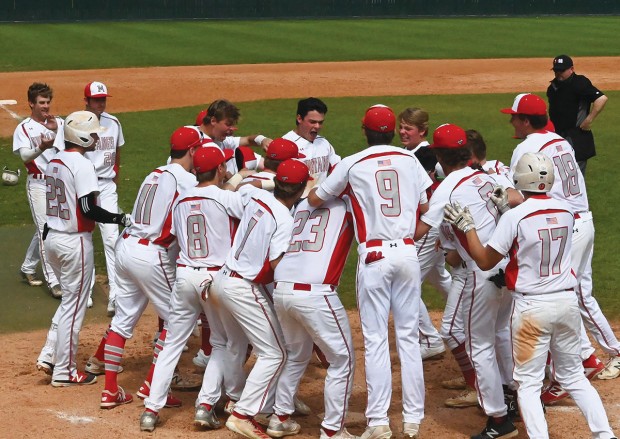 WALK-OFF HOMER Memorial Mustangs senior Jack Riedel receives a heroic celebration after his walk-off home run gave Memorial an early-season victory over the George Ranch Longhorns. Memorial had a 10-3 record before the UIL baseball season was ended due to the coronavirus.

Much like Episcopal, the Memorial Mustangs were off to a great start to the UIL Class 6A baseball season before it all came to an abrupt halt. “It feels like something was ripped from under you,” said Mustangs head coach Jeremy York. “We had 15 seniors, including a foursome of tremendous three-year starters in Ben Dukes, Jack Riedel, Thomas Vincent and Mason Flinn who’ll all be playing collegiate baseball. We kind of saw the cancellation coming, but the finality pulls at your heartstrings for a great senior class.”

Before the season was suspended and ultimately canceled, the Mustangs were off to a 10-3 start and were ranked among the area’s top Class 6A programs. “It ends up being a season of what ifs,” said York. “Regardless of what happens, you’re always going to say ‘what if.’ We were definitely in position to do something special this season.”

All those ‘what ifs’ aside, York said his players are moving forward as best as possible. “One thing we talked about was that it’s not just what happens to you, but also how you respond to adversity. We are right now trying to figure out a way to honor the contributions our 15 seniors made to Memorial Mustangs baseball. Every one of them leaves a legacy to our program.” 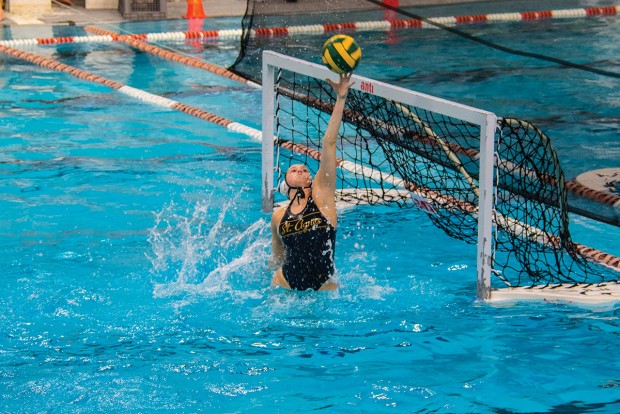 ST. AGNES TO VILLANOVA St. Agnes Academy senior goalie Abigail Shelby led her team to a district championship in water polo just before the season was halted due to the coronavirus. Shelby will play collegiate water polo for Villanova University.

A signing-day ceremony hardly seemed possible in the wake of social distancing, but St. Agnes Academy water polo player Abigail Shelby, who’ll play collegiately at Villanova, received the surprise of a lifetime outside of her Bellaire-area home as a parade of well wishers turned out to cheer on the Tigers senior.

“I missed my teammates so much, and it meant a lot to me that they showed up outside my house on what was supposed to be my signing day. As soon as I stepped out, I started to cry because I hadn’t seen them in so long. It all started with the Villanova water polo coach calling me on the phone and asking me to step outside to check something out. I was shocked and really couldn’t believe it all.”

Along with her teammates, Shelby’s coaches, friends, family and even local Villanova alumni joined in on the surprise celebration highlighted by a parade of cars with horns honking and everyone cheering for Shelby.

The celebration helped cut the sting of a senior season cut much too short for the all-state goalie. “We finished first in district and were looking to win state after an unexpected loss at last year’s state meet,” said Shelby. “It was upsetting, but I’m now excited and looking forward to next season at Villanova.”

12:00 pm to 5:00 pm
Location:
The Galleria, Level One between Nordstrom and Macy's
END_OF_DOCUMENT_TOKEN_TO_BE_REPLACED