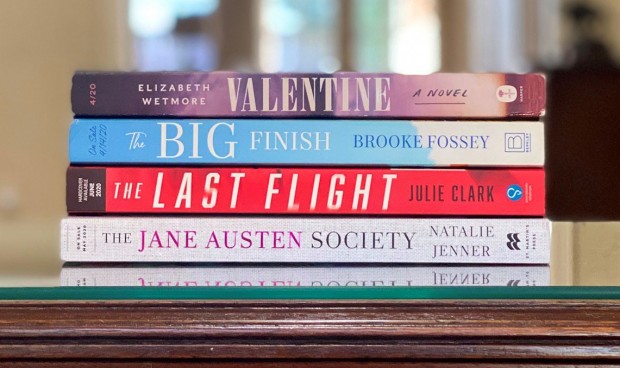 So many fabulous debut novels have published in 2020. The sheer volume of new titles coming out each week makes it hard for a book to stand out, and the pandemic has made it even more difficult for all authors but particularly those who are first-time novelists.

To celebrate these novels, this week, I am highlighting some of my favorites of the year. I love finding new authors whose writing style or sense of place really resonates with me and following them as they write additional novels. I began reading Fiona Davis, Amy Poeppel, Elise Hooper and Hazel Gaynor when each of their first novels was published and have thoroughly enjoyed watching their progression as writers as each subsequent novel has been released.

Here are some of the debuts that stood out for me this year:

The Big Finish by Brooke Fossey - Debut author Brooke Fossey’s life-affirming novel focuses on the importance of community, resilience and human relationships. Best friends Carl and Duffy, two octogenarians residing in the Centennial assisted-living home, spend their days trying to keep themselves entertained and out of trouble to avoid being transferred to the nearby poorly-run nursing home. This gem of a book will stay with me for a long time. This was a May Buzz Reads pick.

The Jane Austen Society by Natalie Jenner - The Jane Austen Society is set in Chawton, England following the Second World War – the town where Jane Austen spent her last years. When Austen’s legacy is threatened, an eclectic group of townspeople band together to save her home and her heritage. Natalie Jenner’s compelling tale is historical fiction at its finest – she transports the reader to another time and place filled with unique and authentic characters while focusing on the importance of literature and its ability to resonate for decades to come. This was a June Buzz Reads pick.

The Last Flight by Julie Clark – Two women eager to flee their own lives agree to swap tickets for their flights at the last minute: Claire gives Eva her ticket to Puerto Rico and takes Eva’s ticket to Oakland. When the flight to Puerto Rico crashes into the ocean, Claire realizes she must assume Eva’s identity to survive, but quickly learns that Eva was not who she claimed to be. The Last Flight is indisputably the best thriller that I have read in ages – Clark skillfully blends great characters, beautiful writing and a superb mystery, and I loved racing through it. This was a June Buzz Reads pick.

Ties That Tether by Jane Igharo - Jane Igharo addresses issues of culture, identity and the stress of family pressure in this clever and fun romantic read. Azere, a Nigerian immigrant living in Canada, falls in love with a French man whom her mother would deem unacceptable. While Azere does her best to avoid him, the two end up working together, and Azere struggles to balance her mother’s wishes and her desire to make her own choices. I learned a lot about Nigerian culture and traditions and thoroughly enjoyed the story from beginning to end. Listen to her podcast interview here.

Valentine by Elizabeth Wetmore - Wetmore’s debut novel takes place in 1976 Odessa, Texas, a town filled with men who have come to work in the oil fields. Following the brutal attack of a teenage girl by an oil field worker, the town struggles to come to terms with the crime, and battle lines are drawn. Wetmore’s lyrical prose and stark descriptions of the dusty landscape and impact of oil discovery on the region create a haunting and ultimately redemptive tale that I could not put down until I reached the last page. This was a May Buzz Reads pick.

Winter Counts by David Heska Wanbli Weiden - Winter Counts stars Virgil Wounded Horse, a vigilante enforcer on the Rosebud Indian Reservation in South Dakota, who is hired by those seeking justice when the American legal system or tribal council fails them. As an enrolled member of the Sicangu Lakota nation (the tribe that lives on the Rosebud Indian Reservation), Weiden credibly details what life is like on the reservation, what it means to be Native American in 2020 and the challenges faced by those trying to preserve their own cultural identity while also finding a place within their larger community. This was an October Buzz Reads pick. Listen to his podcast interview here.

The Woman Before Wallis – Bryn Turnbull tells the story of Thelma Morgan, the American woman who was involved with Prince Edward before he took up with Wallis Simpson and made history by abdicating his throne for her. While the portions of the book detailing Thelma’s relationship with the Prince of Wales are compelling and captivating, my favorite parts of The Woman Before Wallis are those that include Thelma’s twin sister, Gloria Morgan, who married Reggie Vanderbilt, son of Cornelius Vanderbilt II and Alice Vanderbilt. This sweeping, stellar historical fiction tale will delight readers and provide a fascinating glimpse into an earlier era. This was a September Buzz Reads pick. Listen to her podcast interview here.

I would love to hear your favorite debut novels of 2020 – comment below!