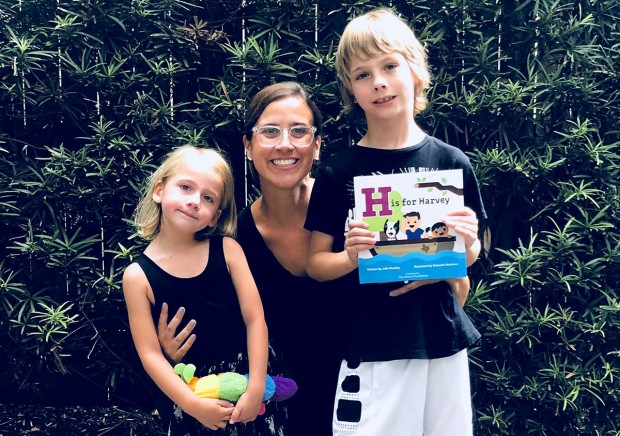 Author Julie Beasley (pictured with her kids Pippa, 5 and Elliott, 8) wrote H is for Harvey, meant to be a keepsake for kids who were impacted by Harvey and to educate those who didn't experience Harvey's effects first-hand.

A day after Hurricane Harvey hit Houston, Julie Beasley scoured social media from her West University home. Luckily, Beasley’s house was dry, but online she followed, heartbroken, as friends and neighbors flooded and were evacuated from their homes.

When Beasley, an ad agency copywriter who had recently moved to Texas from New York, saw the hashtag #HoustonStrong, something clicked. “H” words started to pop into her head—heroes, helicopters, hospitals, hope. “I thought to myself, this would make a great kids’ book,” Beasley said. A year later, her debut children’s book H is for Harvey releases just in time for the hurricane’s one-year anniversary.

“H is for the heroes, the kind without a cape—first responders helping people trapped by water to escape,” Beasley writes, alongside a colorful illustration of a fireman and policeman. With its short sentences, but concepts like a “good Samaritan,” the book lends itself to readers from toddlers to grade school students.

The book, which features catchy, rhyming text and vivid, colorful illustrations by award-winning Houston illustrator and designer Eduardo Martinez, tells the story of acts of everyday kindness during and after the storm. Its overarching themes are help, healing and hope. The book also includes a section on storm facts, including how much water fell because of Harvey, and how Harvey was named. 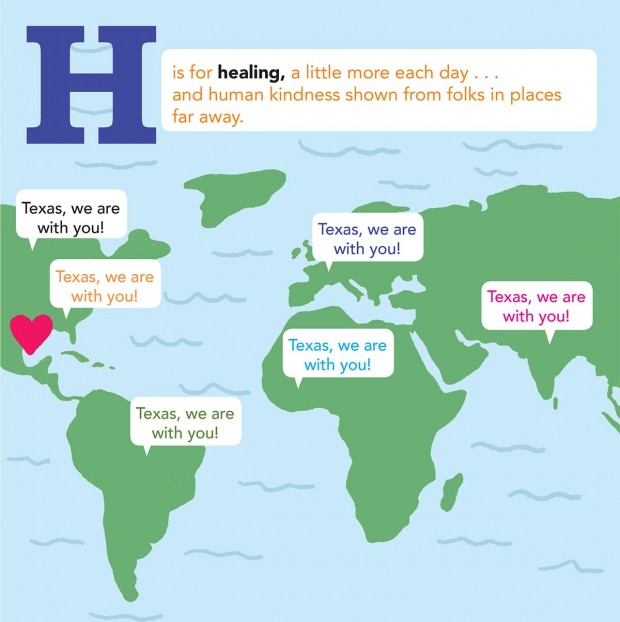 H is for Healing: To launch her new book, Julie Beasley is teaming up with Mattress Mack and El Bolillo Bakery during an Aug. 25 event.

The book got into motion when Beasley started brainstorming “H” words on her computer, then started writing the manuscript during the four days that she, her husband and two children—Elliott, 8, and Pippa, 5—couldn’t leave the house due to flooded streets. She wanted to create a keepsake for kids who went through the storm, but also to educate those like hers, who didn’t experience Harvey’s effects first-hand.

“This was a horrible, yet inspiring event,” Beasley said. “I thought the book would be a nice way for kids to be able to learn and remember.”

Beasley approached publishers across the U.S. with her manuscript, ultimately deciding on TCU Press, based in Fort Worth. She found Martinez, a graphic designer at Rice University, after searching online for “Texas artists” and fell in love with his work.

On Aug. 25, the storm’s one-year anniversary, Beasley and Martinez will sign books at the flagship Gallery Furniture store off Highway 45 from 11 a.m.-3 p.m. Beasley contacted Gallery Furniture’s Jim McIngvale, or Mattress Mack as he’s fondly known, about holding a book event at the store, and was overjoyed when he said yes.

“A big theme in the book, in addition to people’s courage and strength, were the wonderful people that helped with their Texas-sized hearts,” Beasley said, “and he was a huge part of it.” During Harvey, McIngvale sheltered flood victims in his stores and donated money and gift cards to those in need. 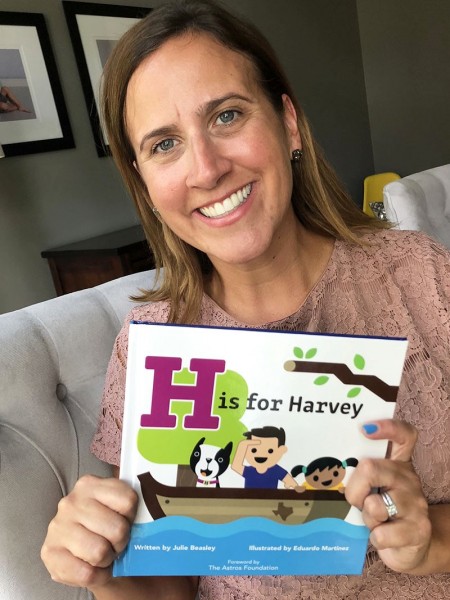 At the book signing event, local bakery El Bolillo—another business that helped during Harvey—will provide complimentary cookies. During Harvey, several bakery employees who were stranded at the store continued to bake bread and donated the loaves to rescuers and volunteers.

As part of her project, Beasley wanted to give back, and 100 percent of the book’s royalties will be donated to the Astros Foundation, the official team charity of the Houston Astros. The Foundation wrote the book’s forward, and it will use funds for ongoing hurricane recovery efforts. This past spring, for example, the Foundation funded meals for volunteers and provided uniforms and equipment to refurbish Little League ballfields destroyed during Harvey.

H is for Harvey will be available at local gift shops and stores, including Magpies Gifts, The Children’s Museum of Houston and Blue Willow Bookshop, and online at Amazon and Barnes and Nobles. Beasley hopes to hold readings at local bookshops and schools, and will have information on upcoming events on her website, and on the book’s Facebook page.

For more articles on Harvey, one year later, read: Weathering the Storm: One year after Hurricane Harvey by Jennifer Oakley, Saving Meyerland: Residents rise to the challenge by Michelle Casas Groogan, and this month's Buzz Baby column: A year after the flooding by Annie Blaylock McQueen.