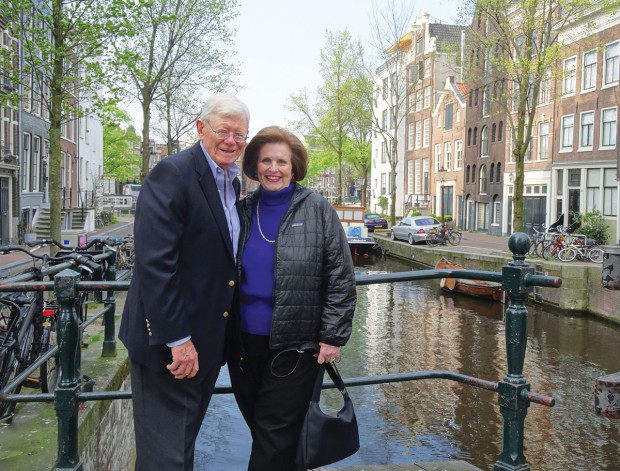 EXPLORING AMSTERDAM Kelly and Carmela Frels on an Amsterdam Canal as they get ready to depart on a train for Paris to meet daughter Catherine and their guide. They had just finished their cruise to view the tulips.

The war to end all wars

We have received an amazing number of contacts about the story of our trip to retrace my father’s footsteps in France as a soldier in World War I [In Dad’s World War I footsteps, by Tracy L. Barnett, November 2018]. People from all over The Buzz Magazines’ circulation area have applauded the depth of Tracy Barnett’s depiction of the horrible conditions faced by soldiers and what a deadly conflict WWI was.

Many readers have told us that the story has led them to investigate family members’ service in WWI and to learn more about the “War to End all Wars” that concluded 100 years ago. Vietnam veteran Richard Pena of Austin, who was on “the last plane out of Saigon,” featured your article on his Veterans Day blog to commemorate the 100th anniversary of the war’s end.

We were invited by one of your readers to attend the NSDAR annual remembrance at the Heritage Society for the Gold Star Mothers of Harris County soldiers who lost their lives in WWI. It was at that ceremony that we met Houstonian Christian Niles Seger, who displayed his great-grandfather’s watch that was used by the WWI allied commanders to synchronize the exact time WWI fighting would stop, “11:00 A M, November 11, 1918, hostilities ceased,” as recorded in my father’s diary.

Thank you for including a travel experience centered around an important moment in world history and timed to commemorate the 100th anniversary of the end of WWI this Veterans Day.

Wow. “When I’m 64” [When I’m 64: Comfortable in my own skin, by Cindy Gabriel, November 2018] is one of the most poignant, authentic, wise, resonant pieces of expression I've read in a long time. I wish I had written it. Thank you for publishing it.

I enjoyed the article about Leslie Flynne [Wild for Yuletide: Christmas décor galore at Leslie’s house, by Cathy Gordon, December 2018]. I worked with Leslie at Gibraltar Savings (later First Gibraltar Bank), and she was a class act. I knew she loved gardening, but I never knew she loved Christmas so much though. Thanks for a great story.

I saw your article on memories of long-ago restaurants in Houston [Restaurant Memories: A look back at Houston’s dining past, by Russell Weil, November 2014] and enjoyed reading it, although I only lived in Houston for a few years in the late ’80s when I worked at the TMC. I met my husband in Houston and have many fond memories from my time visiting a boyfriend at Rice University.

Have you heard anyone talk about the fancy restaurant that I think was in the Post Oak Hotel called the Savoy Room? I have wonderful memories of eating there with my family. Incredible food and service. My niece was young when she ordered the lobster for the first time. The waiter brought it to show her before they cooked it and she started to tear up and said, “I wanted to eat it, not meet it!” We ate there once a year and it became our special place to go when we visited the Galleria from Lake Charles, LA.

Editor’s note: This 2014 article by Russell Weil is still one of our most popular stories. In response to this letter, Russell said he remembers the Savoy Room: “The Savoy Room was in the in-house dining room on the top floor of the Houston Oaks Hotel – now The Westin Oaks, at the Galleria. My brother and I gave a brunch for my parents’ anniversary there one year – it was a big deal!” For more restaurant memories, see this story at thebuzzmagazines.com.