Despite Loss, Astros Fans are Fired Up 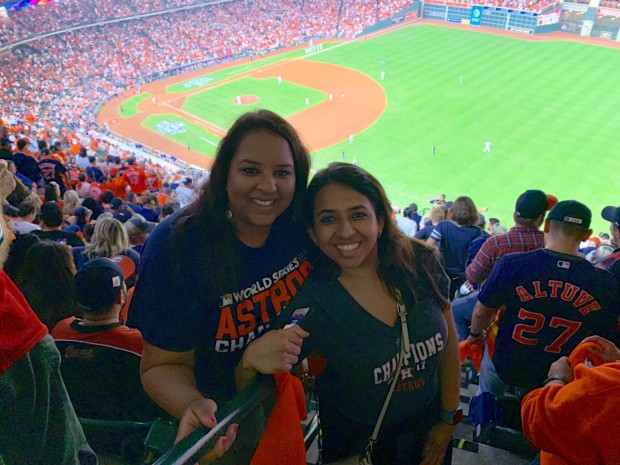 Sisters Shalini and Shreya Aggarwal snap a picture while enjoying Game 6 of the World Series.

Though the scoreboard at Minute Maid Park on Tuesday night disappointed Astros fans, Houstonians left the park fired up for Game 7 of the 2019 World Series.

The Houston Astros ended Game 6 with a disappointing 7-2 loss against the Washington Nationals. This forces a Game 7 that takes place Wednesday evening at 7:08 p.m. 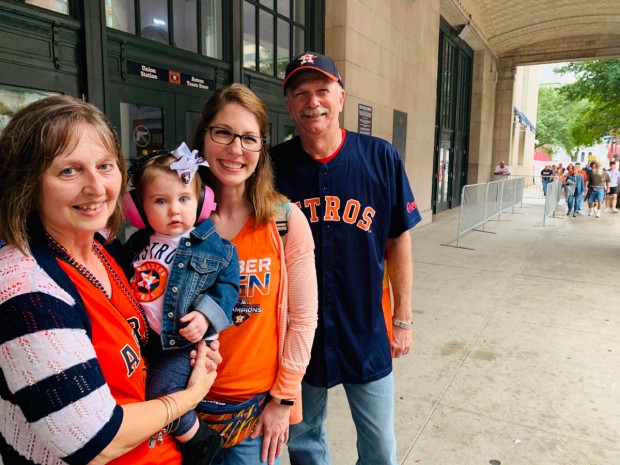 At only 18 months old, Eleanor Harrington has been to close to 50 Astros games. Here, she’s pictured with her grandparents Donna Herron and Greg Herron and her mom Kristin Herron. (Photo: Pooja Salhotra)

Barbara is an avid baseball fan who has been supporting the Astros all season. She even flew to New York’s Yankee stadium to catch games 4 and 5 of the ALCS and last week she and her traveling crew of Astros fans were in Washington D.C., watching the Astros win Games 3, 4, and 5 of the World Series. She still proudly supports the Astros, with handmade signs for each player. “Let’s get it done tomorrow, Go Astros!” she said.

Minute Maid Park also had some first-timers in the stands. Bellaire resident Shalini Aggarwal attended Game 6 – her first World Series game – with her sister Shreya Aggarwal. “Just to experience the atmosphere was amazing,” Shalini said. “Houston fans know how to pump up their players no matter if they win or get defeated.” 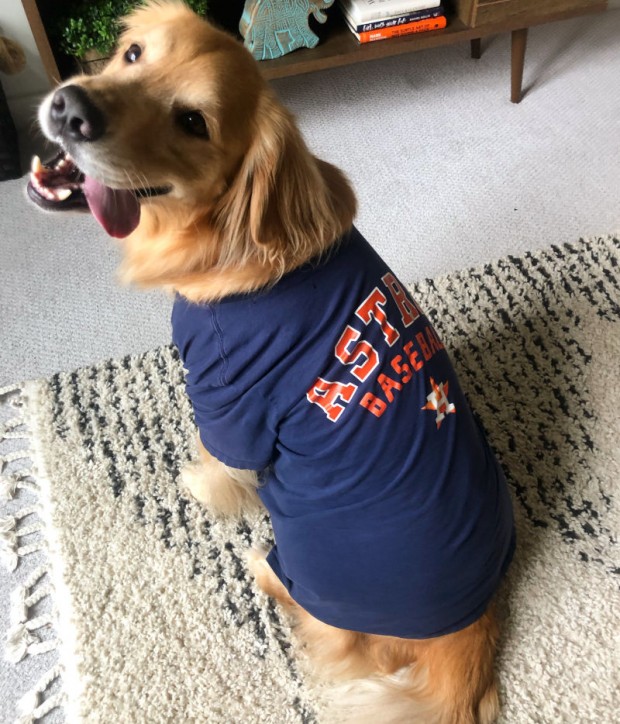 St. John’s School graduate Tarika Khaladkar, who now lives in Washington D.C., made sure her Golden, Roscoe, was decked out for the World Series. Follow Roscoe on Instagram. (Photo: Tarika Khaladkar)

Even in Washington D.C., there are pockets of navy and orange. Kara Neumann, who graduated from St. John’s School and now works in Washington D.C., watched the game from her apartment with fellow St. John’s grad Tarika Khaladkar. They say it can be tough to keep the faith while surrounded by Nationals fans, but they – plus Tarika’s Golden Retriever Roscoe – are excited to continue supporting the Astros tonight in Game 7.

“Excitement is just so high here, and rightfully so as the Nats chase their first World Series championship,” said Kara. “That being said, I’m proud to be an Astros fan and will wear my navy and orange proudly tonight, and cheer them on to get us the championship!” 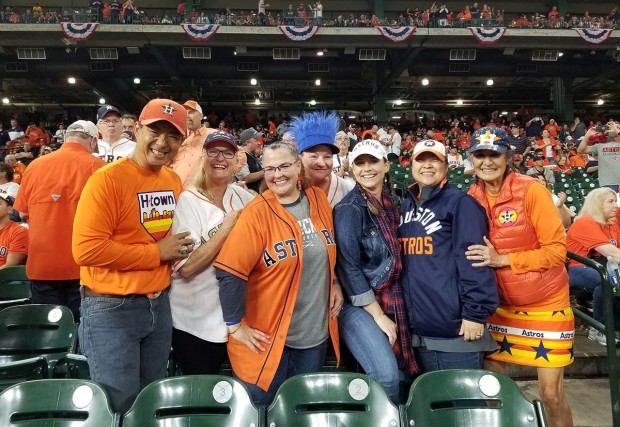 Barbara Moon (at right) has made many new friends as an Astros season-ticket holder. Here, she’s pictured at Game 6 with (from left) Nguyen Le, Angie Peacock, Katie Peacock Stiles, Karen Walker, Carrie McCullers and Yumi Le. Barbara will be at Minute Maid park with her famous signs for Game 7 of the World Series. 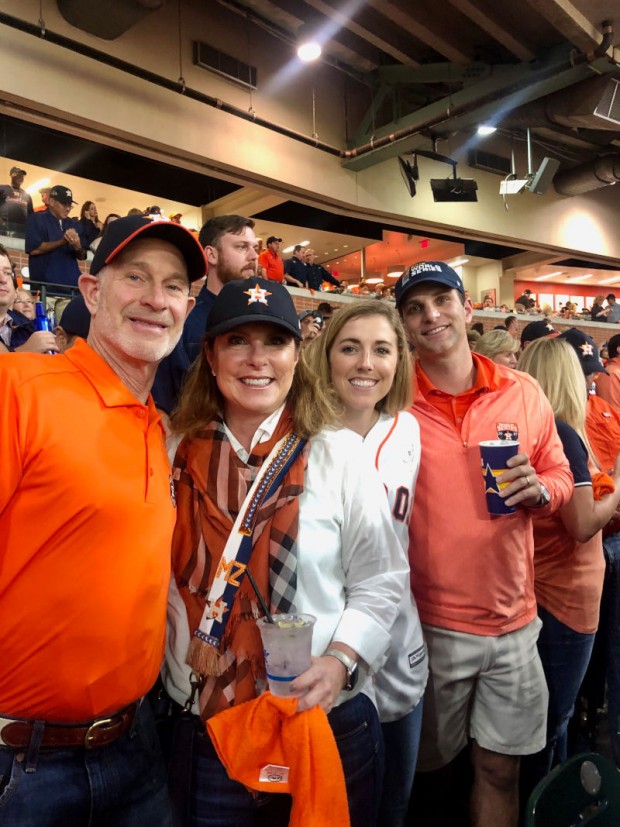 The Zlotnik family has attended all World Series 2019 games. Pictured here are (from left) Bob Zlotnik, Marcie Zlotnik, Lauren Zlotnik and Kevin Zlotnik getting ready for first pitch at Game 6. 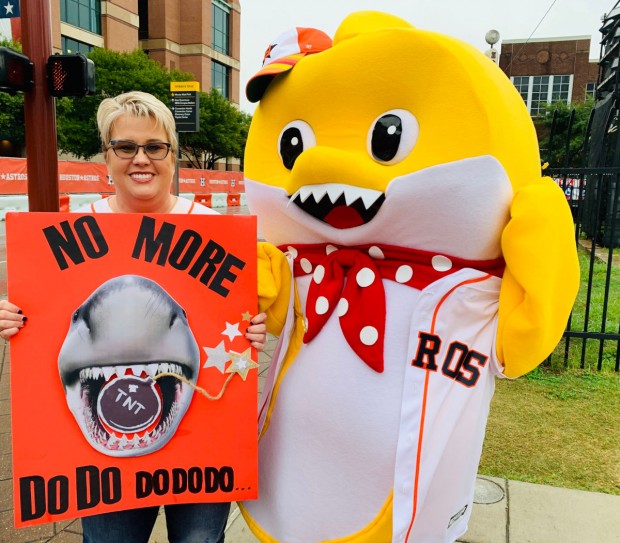 Kim Shaw, originally from North Houston, traveled from Las Vegas to watch the World Series Game 6. She made this sign referencing the Nationals’ anthem of this season, “Baby Shark.” (Photo: Pooja Salhotra) 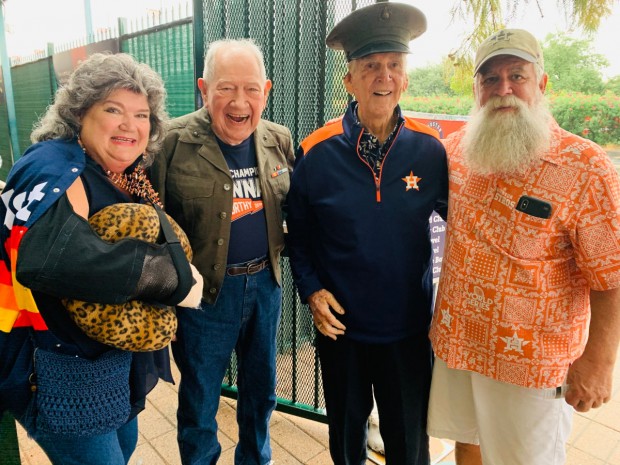 Marlene Curtis (at left) and her husband Mike Curtis (at right) attended the game with both of their fathers, John E. Curtis and Donald Laswell. (Photo: Pooja Salhotra) 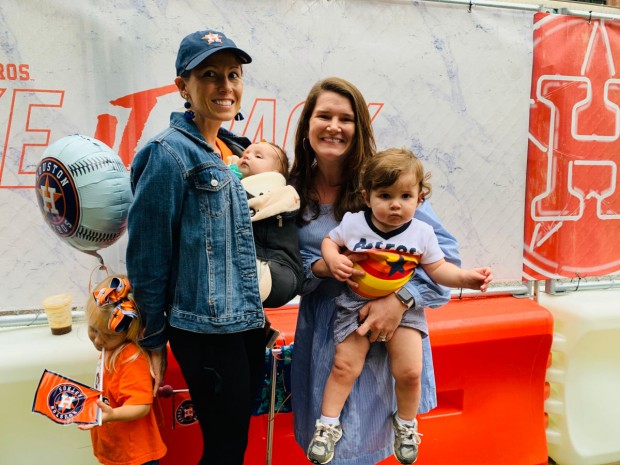 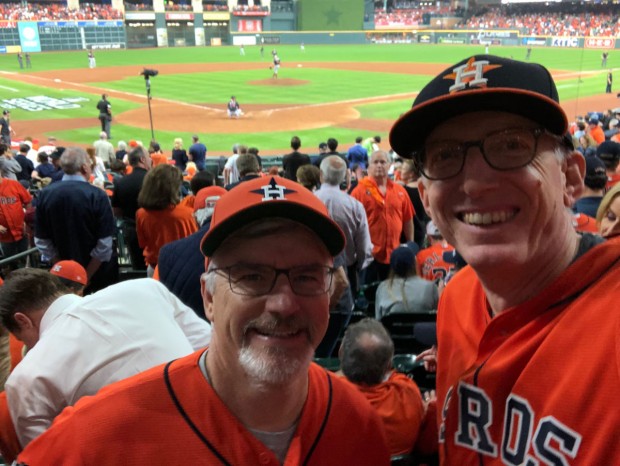 Friends Greg Hassell and Brock Wagner, ready for the hometeam to Take it Back. 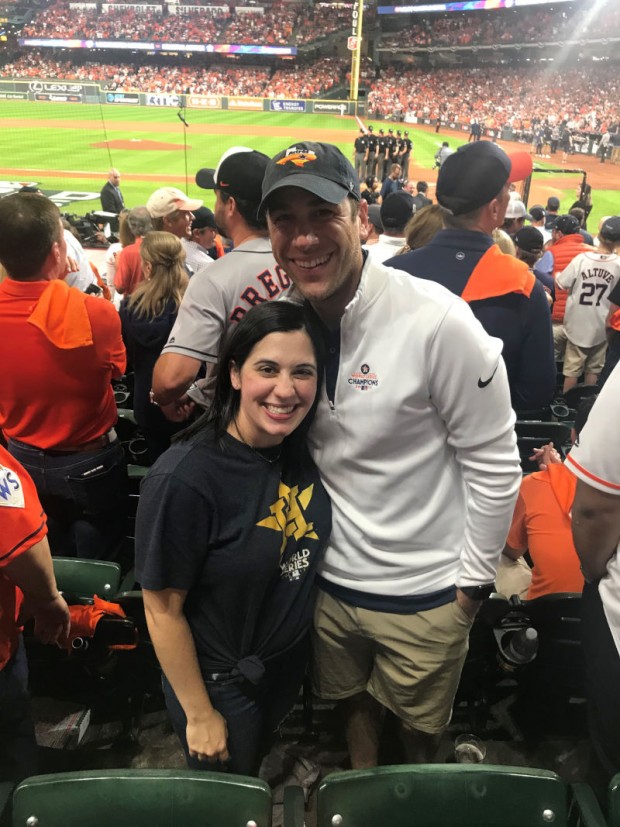 Lauren Fox Sancton and Marc Sancton were thrilled to cheer on the Astros during Game 6. 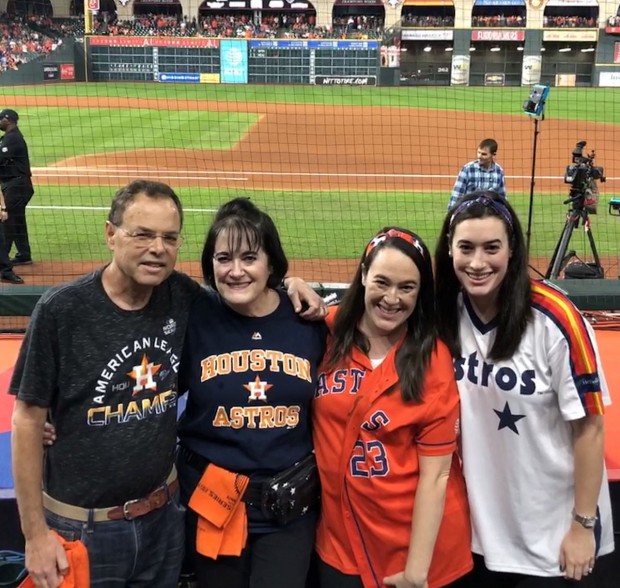 The Rubenstein family loves attending Astros games together and roots for the 'Stros at Minute Maid Park all season long. Pictured are (from left) Jim and Barbara Rubenstein, Julie Blumberg and Lisa Friedlander. 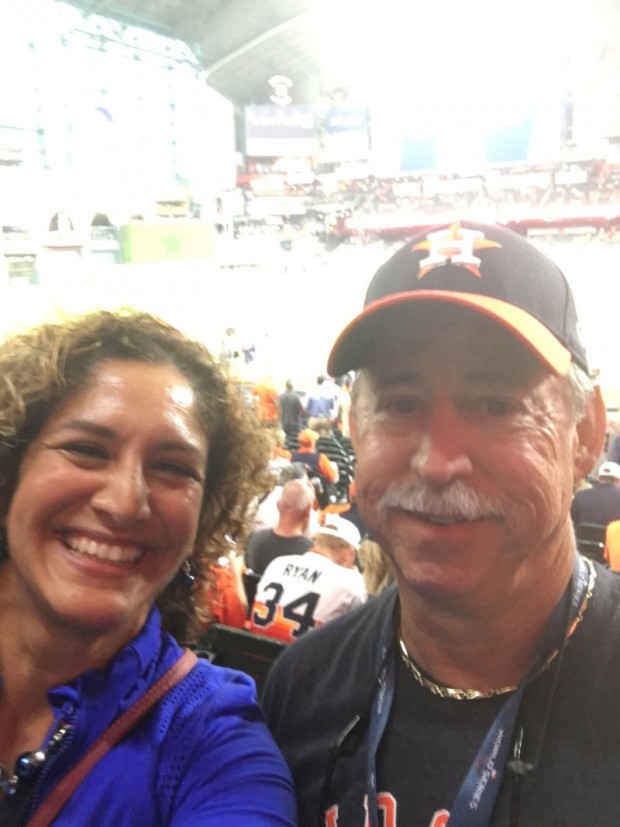 Otilia Gonzales and Michael Darlow took a break from work to root for the Astros in Game 6 of the World Series. 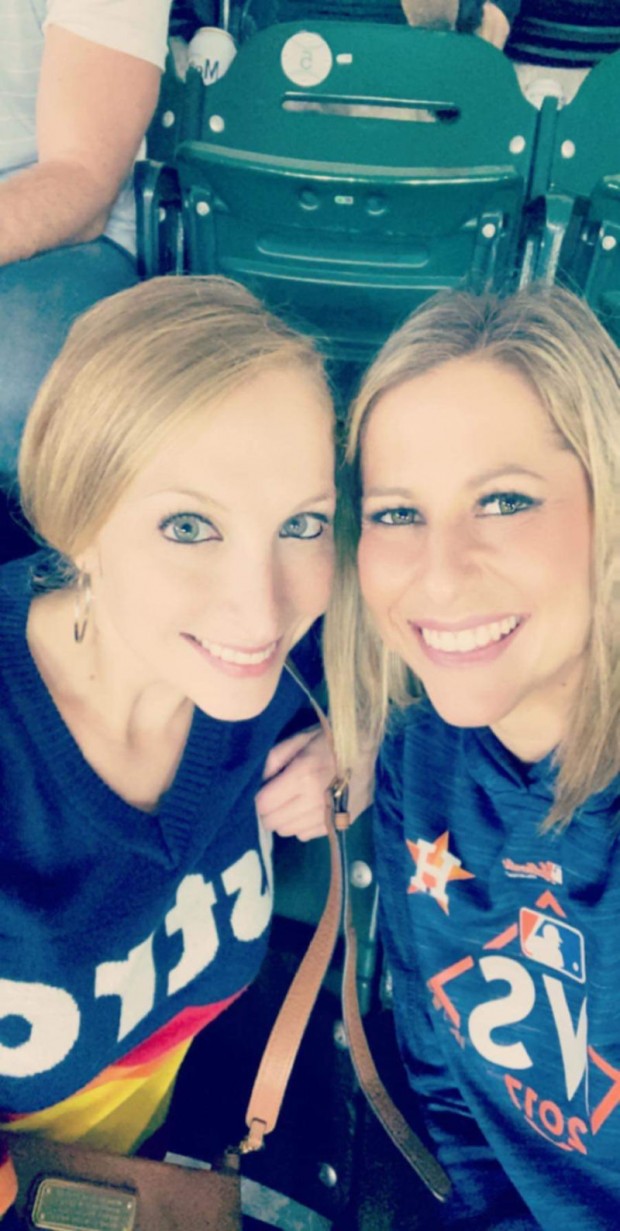 Friends Jill Kaplan and Lauren Levin Mandel were excited to root for the Astros during Game 6. 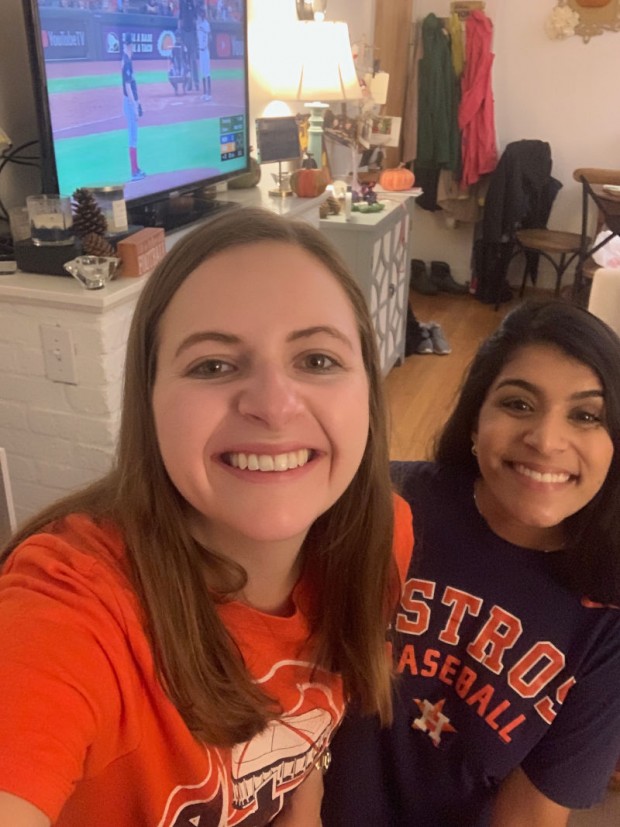 Friends Kara Neumann and Tarika Khaladkar, graduates of St. John’s School, live in Washington D.C. now but were still rooting for the Houston Astros together during the World Series. 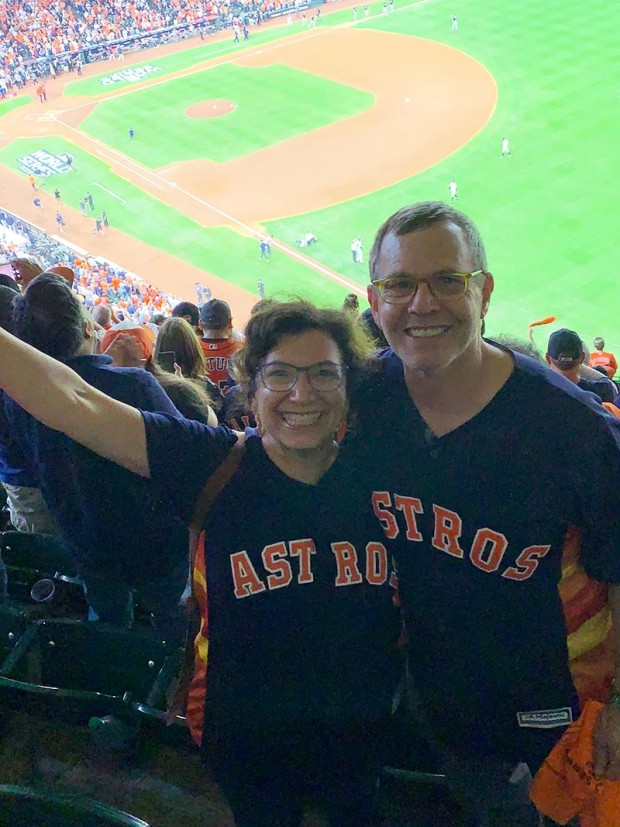 Joni and Michael Hoffman were disappointed by the outcome of Game 6 but enjoyed being part of the World Series excitement. 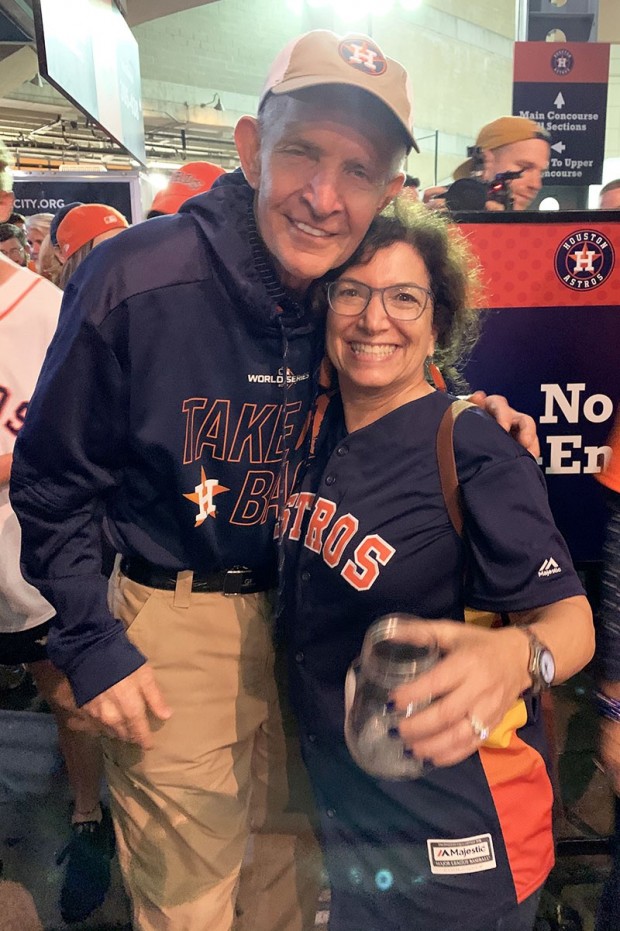 Joni Hoffman was excited to meet Jim McIngvale (aka Mattress Mack) who has been betting on the Astros to win it all.